The autism treatment and research facility is a premier center for education and assistance for families. 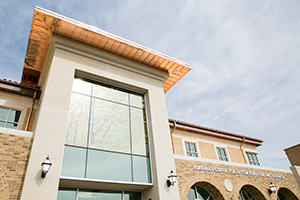 The day before Halloween, the students at the Burkhart Center for Autism's Transition Academy were busy preparing for their Halloween party. Students strung cobwebs through the hallways – a few went in search of spiders, though they never said if they were looking for plastic spiders or the living variety – painted pumpkins, baked scary-shaped cookies and danced to Michael Jackson's “Thriller.”

They were having as good a time getting ready for the party as they had at the party the next day.

“Tawny, you've got cobwebs on your pants leg,” one student called to vocational instructor Tawny Hill.

“I feel like that's going to be my life from now on,” she responded with a smile.

The students at the Transition Academy come to Texas Tech University five days a week to learn new skills, make friends and prepare for jobs. They like Paul McCartney, soccer and texting their friends. They are seduced by the smell of fresh-from-the-oven chocolate chip cookies and averse about cleaning the kitchen.

They also all have an autism spectrum disorder (ASD), creating a set of challenges many adults don't even think about, like the need to call in sick to work instead of just not showing up, how to talk to a supervisor and what hygiene habits are necessary for the workplace. These students go to school to learn how to live independently, be successful at a job and interact with other people.

“Sometimes after high school, kids like these just go and sit at home, let their parents take care of them and play video games,” job coach Katherine Green said. “They have little to no social skills or independent living skills.”

While the students are glad they're learning job skills, creating art and cookies and holding down internships, the appeal of the Burkhart Center is much more basic.

“It's nice to have a few friends here,” student Michael Morton said.

On Sunday, the Burkhart Center celebrates one year in its beautiful, high-tech, 28,458-square-foot building just east of the Education Building. For the first eight years of its existence, it was housed in the College of Education. Now faculty, staff and students have access to observation labs, a gym for fitness, an art room and a mock apartment with a fully equipped kitchen. It offers the Burkhart Center much more room to grow. 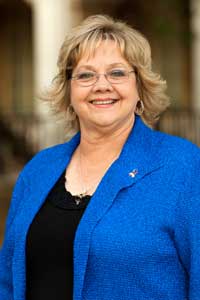 “There's definitely a lot more space,” said Morton, 20, who's been in the Transition Academy for a year and a half. “It's a lot more comfortable.”

Transition Academy director Janice Magness said the new building has opened up the center to be so much more than it could in the previous space. When they were limited to three rooms in the Education Building, all they could do was provide the Transition Academy, and that was still limited. They couldn't teach students how to do laundry, clean or prepare a meal. There was no gym space, no observation rooms for teaching and, certainly, not the space to throw a big, well-decorated Halloween party.

“Moving into the new building opened up many doors for us,” she said. “When we got this building we were certainly able to spread out and do all the things that we really wanted to do with our programs.”

The Burkhart Center is composed of several programs for people with autism spectrum disorders:

The Transition Academy is a program for 18- to 30-year-olds on the autism spectrum who have graduated from high school. This is the flagship program of the Burkhart Center, teaching students job, life and social skills as well as placing them into internships and jobs.

Preparing for the workplace

Students graduate from the Transition Academy, Green said, but it's not a set schedule. The staff evaluates each student's progress; some graduate sooner than three years, some take a little longer. 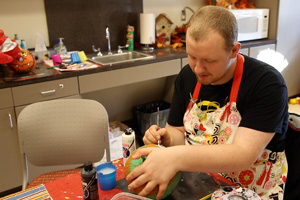 Taylor Burson, 20, of Haskell, is in her second year at Burkhart. In addition to assisting at the front desk, she has participated in two rotations of internships, doing a semester each at the Child Development Research Center and J Hoffman's. Burson said one of the best skills she's learned at the Transition Academy is controlling her emotions, which she hadn't learned to do in other programs.

“It pretty much helps me when I'm outside of school,” Burson said. “When I go out in places to work at a job, it helps me so much.”

The Transition Academy is launching a floral business in the spring, where Burson plans to work.

“I just want to design beautiful flowers,” she said. “I've always wanted to make these so bad.”

Brayden Cheshire is in his first year at Transition Academy, “but it feels like four years,” in a good way, he said. He's made great strides in controlling his anger and becoming an artist, including drawings of characters: some drawn from TV shows or his favorite movies, others that he made up. He was painting a pumpkin in preparation for the Halloween party, naming the pumpkin Mikey, in honor of his friend.

Morton, the friend, said Cheshire named the pumpkin after Michaelangelo, the Teenage Mutant Ninja Turtle. But he likes the sentiment even as he brushes it off. For the dozen students in the Transition Academy, who frequently are largely defined by their disorder, relationships have been hard to come by. The ASD always stood out. The Transition Academy provides a place where they belong. They've made it theirs.

“I think it's great,” Jared Hernandez, 20, said as he disassembled an electronic pumpkin. “I'm finding better jobs than what I have now.”

Hernandez is a dishwasher for a local restaurant, a job he's held for two and a half years, plus an internship at Goodwill. With the skills he's acquiring, he wants to see what else is out there. 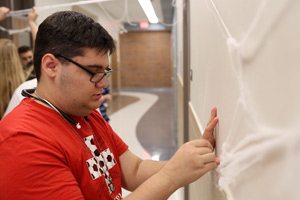 Students with the Transition Academy recently decorated the Burkhart Center for their Halloween Party.

“It's a great opportunity for anybody,” he said.

Employers are much more willing to hire students diagnosed with ASD now than they were just a few years ago, Magness said. When she reaches out to partner with local employers, she focuses on her students' strengths: When they learn how to do a task, they'll do it the same way every time. They're punctual. They don't gossip.

“I used to say, ‘and they won't stay on their phones,' but I can't say that anymore,” Magness said. “I think all of us now are very tied to our cell phones.”

The new building is already full, featuring a Quiznos restaurant, which will be staffed largely with Transition Academy students and graduates. Many are excited to work there, while others are happy with their jobs and internships at Goodwill, University Medical Center and the Garrison Center. In many ways, they are just like most other students their age. They may be a little overprotected, Magness said, but they're learning to take responsibility for themselves. Two live independently, and several drive to campus.

“Our hope is when our students graduate from the Transition Academy, they will do so with a job and the tools they need to pursue their dreams,” Magness said. “A lot of our students just don't know what they're capable of.”