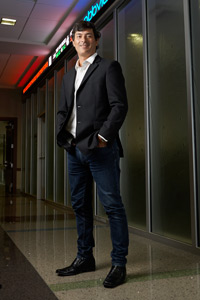 Franco Parisi was an independent candidate in the 2013 Chilean presidential election.

It's not often that Texas Tech University lands a former presidential candidate as a Visiting International Scholar.

But students in the Rawls College of Business will have the opportunity to learn from someone who has expertise in world finance and the unique perspective of trying to become the leader of his country. Franco Parisi, 47, was an independent candidate in the 2013 Chilean presidential election, receiving 10.11 percent of the vote.

Parisi achieved notoriety through his work on Chilean radio and television explaining economics, earning the nickname “the economist of the people.” He ran as a social liberal, hoping to bring the poor of the country up in status both socially and economically.

“In Chile, we need more freedom, but we also need to be protected and have help from the government,” Parisi said. “If you're born as a rich kid, you are going to be successfully rich. If you are born as poor, you are going to die as a poor man, and I think that is not fair. There are very few chances to move up.”

In essence, Parisi wants everyone in Chile to have the same opportunity his family received. The son of a former captain in the Chilean army, Parisi's father left the military and received a degree in economics from the Universidad de Chile. He became a successful executive, allowing Parisi to study at the Universidad de Chile as well as the University of Georgia, where he met Lance Nail, dean of the Rawls College of Business.

During his campaign, he said he encountered many talented people; all they needed was a small opportunity to succeed. But those opportunities, right now, are few and far between.

His message seemed to ring true. To have his name placed on the ballot, Parisi collected more than 50,000 signatures on a petition, then received more than 666,000 votes across the country.

“The people knew I could not make big changes. I wasn't going to change their salary, or double or triple it in three years,” Parisi said. “But they knew that their kids, maybe their grandsons or granddaughters could be better off with me than with another candidate.” 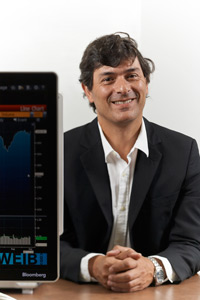 Parisi's campaign consisted of four people and accepted a total of only $10,000 in campaign contributions.

Parisi gave several examples of the issues he said lower income Chileans face every day that make climbing out of poverty difficult.

Banks in Chile earn a return of 25 percent, compared to the U.S. where banks earn 8 or 9 percent. With no bankruptcy law available for citizens who are unable to pay such a high interest rate, there's no way for an estimated 2 million Chileans to get out of debt.

He recalled one time when he took on the bankers about their interest rates, and one was particularly aggressive in response to his position. Turns out it was one of his former students. Three months later, he ran into that former student, who admitted after he had been fired by the bank that Parisi was correct.

In Chile, the government puts a 20 percent tax on medicine, and because of that, drug prices are to the point that some Chileans can't afford them. He also drew the ire of the mining industry for suggesting they pay for the water they use, which they receive without charge.

Parisi visited a town in the northern part of Chile called Alto Hospicio and talked with mothers who had several family members involved with drugs, some as young as 8. In Chile, however, to get off drugs, a person must spend time in a clinic at a rate at $100 per night, which he said is impossible for some people to pay. His idea was to have affordable clinics in each Chilean county to help combat the drug problem.

As his campaign gained popularity, however, Parisi said he became a target of attacks by the larger political parties, who tried to disparage his name publicly. He said he had embarrassing information on other candidates and could have fought back with dirty tactics, but chose instead to throw that information in the trash.

He was also proud his campaign, which consisted of just four people and accepted a total of only $10,000 in campaign contributions. He even turned down a large sum of money from a gentleman who he later found out was taping him. The man planned to use the tape against Parisi had he accepted the money.

“I wanted to make a statement that if you want to make changes, you cannot have favors to pay,” Parisi said. “You know that if somebody gives you money, in the end, they are going to change or ask you for something. One of the things that you learn during this process is that there are so many people who are going to be happy when you fail. (When you take money) you get farther from the people every day, and that was not good.”

It is that mood in Chile, of highlighting other's failures, trying to dig up dirt on other people, and the desire for all Chileans to have a better life, that he still hopes to change. But running for president again is not something he is considering at this time.

“I have to build for what I am working at now,” Parisi said. “I'm working at a great university and I have a lot of respect for my students, so I want to focus on my situation in America. You need a bunch of money if you want to be president, at least $10 million. If I don't get the Powerball, it will be difficult to get that kind of money.

“I'm sure that if I say anything about Chile I will be attacked for it. It's not a good situation to be in to receive those attacks. But in Chile we have to make some changes. I hope the current president will do it. If not, Chile is going to be hurting for a long, long time.”

What is the Economic Impact of Oil, Gas in Permian Basin?