The convention normally hosted in Midwest and Northern regions comes to West Texas. 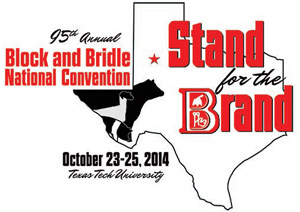 The convention normally hosted in Midwest and Northern regions comes to West Texas.

This is the first time for the convention to be held in West Texas. Normally, the convention is held in the Midwest or northern regions of the United States.

“The host committee has been working diligently since last spring to put together a great program,” said Kayla Rathmann, Texas Tech's Block and Bridle Club adviser. “We are very excited to host our friends from across the United States who share our passion for animal agriculture.”

The Block and Bridle Club promotes agriculture and provides a better understanding of the diversified livestock industry both in West Texas and around the world.

During of the convention, approximately 300 college students will interact with one another and influential members of the agriculture community by attending several keynote addresses, breakout sessions and industry tours. They will enhance their knowledge of agriculture in the areas of cattle, swine, sheep and goat, poultry, horse, meat science and food safety, veterinary sciences and climate change.

On the final day of the convention, participants will team with Kids Against Hunger and package approximately 30,000 meals in the fight against world hunger. These meals will be delivered to children in need in the U.S. and around the world. To learn more about Kids Against Hunger, go to their website.