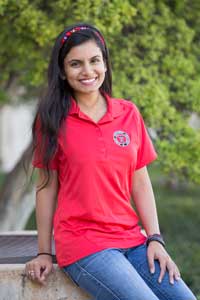 What originally was a trip to Houston to take part in a Deferred Action for Childhood Arrivals (DACA) roundtable turned into an opportunity Saba Nafees could not refuse.

Nafees, a Texas Tech University student, recently was selected to be a White House Initiative on Asian Americans and Pacific Islanders (WHIAAPI) E3! Ambassador. The alumna and first-year mathematics graduate student, originally from Pakistan, attended the roundtable discussion about engaging the Asian-American youth and community in the DACA program in August and spoke about her background. That speech and her TEDx talk, Nafees said, is what she believes caused Tuyet Duong, senior adviser for WHIAAPI, to encourage Nafees to apply and eventually be selected as an ambassador.

“I believe the TED talk, and my DACA student status, which showcases an immigrant background inherent to the American heritage, greatly strengthened my application,” Nafees said.

Nafees, along with three other E3! Ambassadors, is responsible for Region VI, which comprises Texas, New Mexico, Oklahoma, Arkansas and Louisiana. Thirty-two people from throughout the nation were selected to be E3! Ambassadors for the 2014-2015 year, according to the WHIAAPI blog.

“Saba has embraced a wonderful opportunity to not only represent herself and Texas Tech University in this initiative, but more importantly extend a voice to Asian-American and Pacific Islander youth and share her passion for education,” said Texas Tech President M. Duane Nellis. “There is no limit to Saba's future. She is a wonderful student and an outstanding selection for this role.”

The E3! Ambassadors will work with Asian-American and Pacific Islander youth to educate, engage and empower them on education, mental health, pathways to public service and DACA throughout the year, according to the E3! website. The applicants were required to address those issues in the application.

“This is the inaugural year of this program,” Nafees said, “which is very critical because there are lots of things we will still be learning, lots of things the White House Initiative will probably modify for the following years. But this is a very important, very exciting year.”

Looking to Make a Difference

Education is the first topic ambassadors will discuss, Nafees said, which involves helping students learn about college affordability resources as well as talking about current events. Nafees, who is a Student Government Association (SGA) graduate student senator, plans to work with the Diversity Committee, student organizations, other Texas Tech resources and her fellow Region VI representatives to accomplish her goals involving education. 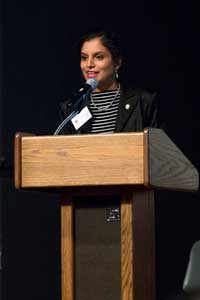 Nafees is the CEO and president of Texas Tech Innovation, Mentorship and Entrepreneurship (TTIME).

“Basically, in this first stage,” she said, “I want to make sure they know there is a voice out there for them, and if they have a profound issue, it can be taken care of and there are people in the federal government who care.”

Part of Nafees' duties as an E3! Ambassador includes hosting a watch party for the National Young Leaders Dialogue on Education Google Hangout on Thursday (Oct. 30). An educational leader will discuss education in the Asian-American population, Nafees said, and the three ambassadors with the most RSVPs will appear on screens in Washington. Anyone can RSVP.

“I will need the help of pretty much all of Texas Tech to help me fulfill my roles here as an E3! Ambassador,” she said.

This summer, Nafees also was chosen to become a One Young World Ambassador for their 2014 World Summit. One Young World is a nonprofit organization that gathers youth leaders from across the world to debate, formulate and share solutions for pressing world issues that youth face. Delegates can be 18-30 year olds who have demonstrated leadership and are committed to making positive changes. This year's summit took place Oct. 15-19 in Dublin, Ireland.

Nafees said she was very surprised and honored to have been selected.

To apply, individuals created a candidate profile. Nafees said her profile served as a dashboard. She was able to upload pictures, past work, and expand on her passions, interests and skill sets.

“I'm lucky being a Red Raider, being at Texas Tech, that I have all these great mentors that have helped me grow and who are proud of me,” Nafees said. “This is the first time for Texas Tech to do something like this, and I want us to continue to raise the bar in the Global World.”

One of the initiatives Nafees participated in during One Young World was an Ebola awareness walk. She also helped write a petition to ensure proper treatment centers in Ebola-affected countries, which was then presented to Michael Moller, United Nations acting head of the economic commission for Europe. The leaders also created a donation page through Doctors Without Borders to supplement the petition. 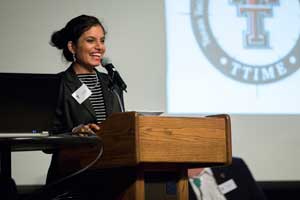 This summer, Nafees also was chosen to become a One Young World Ambassador for their 2014 World Summit.

Nafees was a member of the Honors College and graduated with highest honors from the college along with her bachelor's degree in mathematics in May. She is working on her master's degree in mathematics while conducting research with Sean Rice, a professor of evolutionary theory and mathematical biology. She also teaches introductory biology laboratory sections for Michael Dini, an associate professor in biology education.

Nafees said being a DACA student is the reason she is able to stay in the United States, and she is part of the SGA Diversity Committee as well as the Intergovernmental Committee. She also is the CEO and president of Texas Tech Innovation, Mentorship and Entrepreneurship (TTIME) .

“I'm honored to be highly involved in TTIME,” she said. “The TTIME student leaders with the help of the Texas Tech administration and our wonderful adviser, Jennifer Horn from the Office of the Vice President for Research, are at the forefront of trying to lead this new student innovative group to get off the ground and have a great founding year.”

Nafees also serves as the senior adviser for the mathematics ambassadors program, which she started two years ago.

Aliza Wong, associate dean of the Honors College, said she believes Nafees is a student who changes others' lives, and those thoughts were clear from the moment she met Nafees a year ago at a new member meeting for Mortar Board.

“She is an incredibly strong, powerful and humble person who is just beginning to discover her power as a writer, speaker and leader,” Wong said. “And if this is only the beginning, I cannot imagine just how brilliant her future will be and how many people she will inspire to compassion, understanding and tolerance.”

Getting to Know
Saba Nafees

I think it chose me, and I chose it. It was more of a meant-to-be type thing for me because I was looking for financial assistance from lots of different schools across the state and Texas Tech was the one that reached out and gave me a grant for my first year.

What is your favorite memory of Texas Tech so far?

There are a lot of good ones throughout the years, of course graduating in May, and also all of my memories from the Honors College, and then being on homecoming court out there on the field, that was nice, too.

Who is your favorite professor and why?

There isn't really an absolute favorite because I love all of them and even some of them who have never been my professor but have been good mentors to me. I'm just forever grateful for them. I guess you could say Edward Allen from the mathematics department, he taught me in two classes and he was just amazing, a good teacher, very caring and someone who is still a mentor of mine.

I do like the Double-T bench once I found out what it was, but I do like the top of the Mathematics Building. You can actually get out onto it from the windows of the grad student offices up there, so it's pretty nice. You get a nice view of the campus. But I do like the courtyard in Holden Hall, it's very nice.

I really like a lot of the homecoming traditions and events that happen. I didn't realize how spirited it was until I was part of it last year. And though this is not necessarily a happy situation, I do like the lowered flags at Memorial Circle because I think that's a really good tradition, and it shows our respects.

I just love bleeding red and black. I mean, whenever I take trips across the country or across the world, wherever I go, I feel that I am an ambassador and a representative of Texas Tech because I always have my Tech pin on, or a Tech shirt on or red and black on, and people are always wondering why. It's just because I'm honored to be a Red Raider because of all that it has given me. I am inspired to give back.