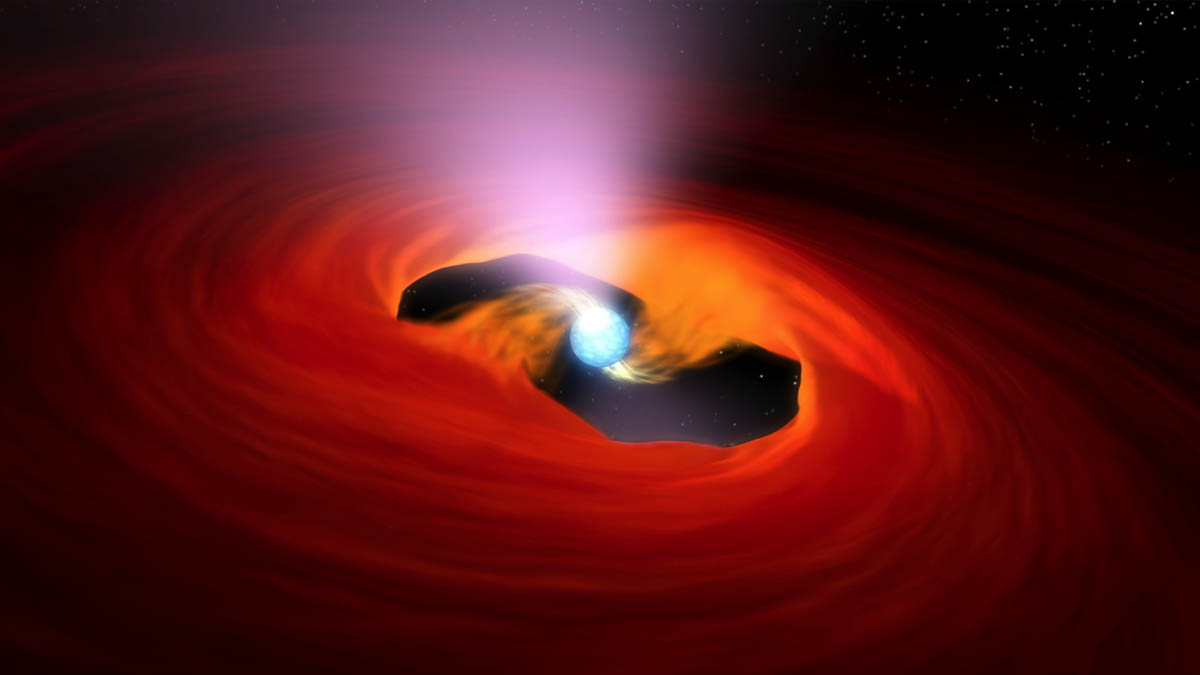 Astronomers have found a pulsating, dead star beaming with the energy of about 10 million suns. This is the brightest pulsar – a dense stellar remnant left over from a supernova explosion – ever recorded.
Image credit: NASA/JPL-Caltech
Click to enlarge or see animation below.

A Texas Tech University astrophysicist was part of a team of researchers who recently discovered  a new reason for mysterious ultraluminous X-ray sources to exist in the universe.

The discovery of the brightest pulsar ever recorded was made by accident during an observation aimed at looking at a recent supernova explosion in the nearby galaxy M82. The research was published in the Oct. 9 edition of the peer-reviewed journal Nature.

Tom Maccarone, an associate professor of physics at Texas Tech and co-author of the paper, said pulsars are dense stellar remnants left over from a supernova explosion. The one discovered burns with the light intensity of about 10 million suns. The discovery was made with NASA's Nuclear Spectroscopic Telescope Array, or NuSTAR.

“For years, scientists believed the ultra-rare, ultraluminous X-ray sources were caused by black holes eating other nearby stars, accreting gas and emitting a light that's millions of times brighter than our sun,” Maccarone said. “That may still be the case with most. However, we discovered that one of these entities, of which there are about 20 known so far, is actually a pulsar. The one we studied was in the M82 galaxy 12 million light-years away, and the X-ray emission we saw showed a pulse. That told us this was actually a pulsar – a star with about the mass of the sun packed into a region about the size of a city. The light it was emitting had a sort of lighthouse effect, and there was a magnetic pole and rotation pole. The light would come around periodically. That's why this one is so special.” 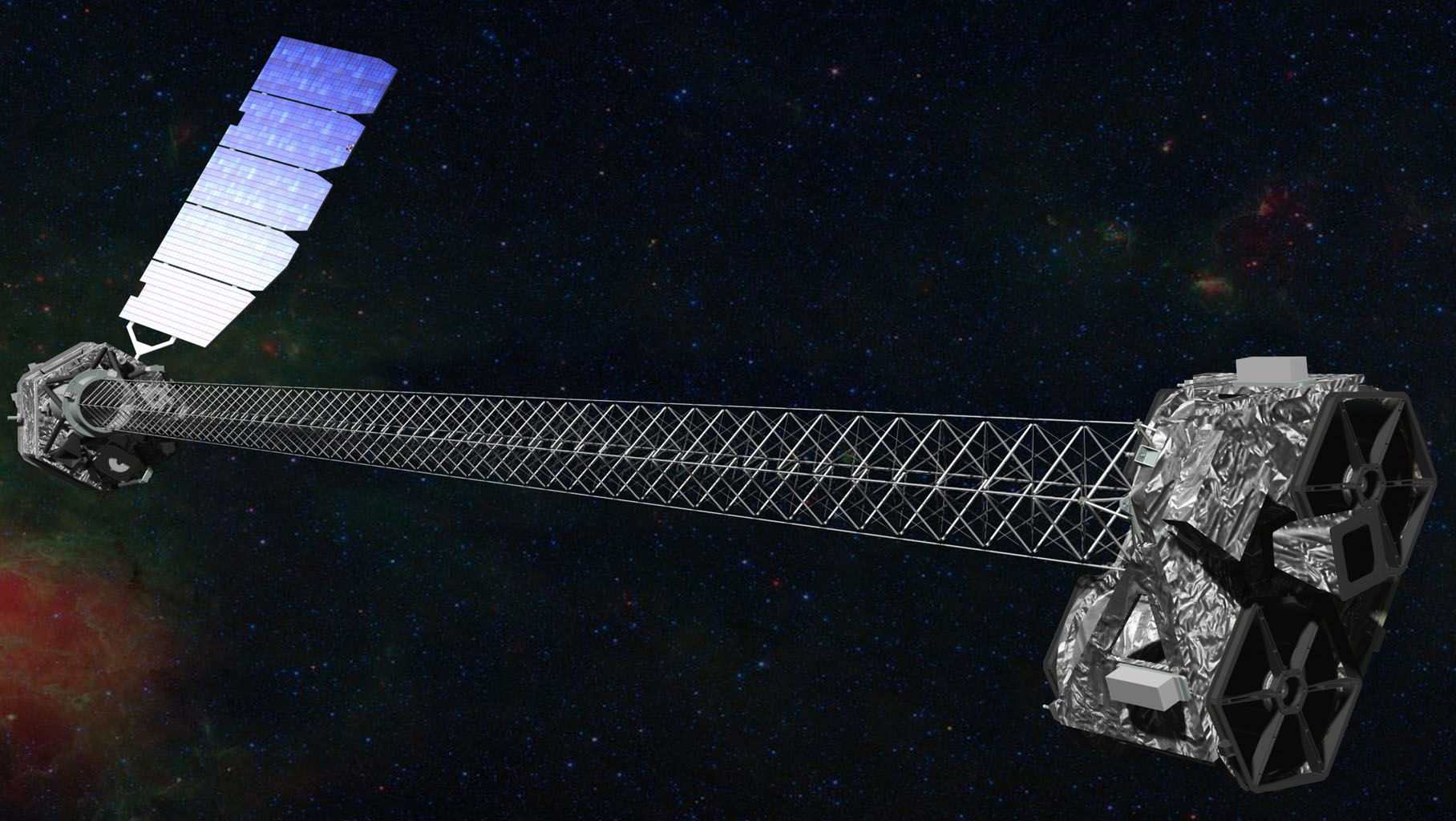 Artist's concept of NuSTAR on orbit. NuSTAR has a 10-m (30') mast that deploys after launch to separate the optics modules (right) from the detectors in the focal plane (left). Image credit: NASA/JPL-Caltech
Click to enlarge.

Pulsars belong to a class of stars called neutron stars. Like black holes, neutron stars are the burnt-out cores of exploded stars, only puny in mass by comparison. Pulsars are neutron stars that send out beams of radiation in the form of radio waves to ultra high-energy gamma-rays. As the star spins, these beams intercept Earth like lighthouse beacons, producing a pulsed signal.

Maccarone, working with Matteo Bachetti at the University of Toulouse in France,  suggested the method for determining what could be making the ultralumninous X-ray source. By finding all the times the pulse of light turned on and off, taking X-ray telescope images at both times and subtracting the images from each other, the pair were able to see the source causing the ultra-bright light.

“You might think of this pulsar as the ‘Mighty Mouse' of stellar remnants,” said Fiona Harrison, the NuSTAR principal investigator at the California Institute of Technology in Pasadena, California. “It has all the power of a black hole but with much less mass. The pulsar appears to be eating the equivalent of a black hole diet.”

The discovery will help astronomers understand how black holes gorge and grow so quickly, which the scientists say is an important event in the formation of galaxies and structures in the universe. 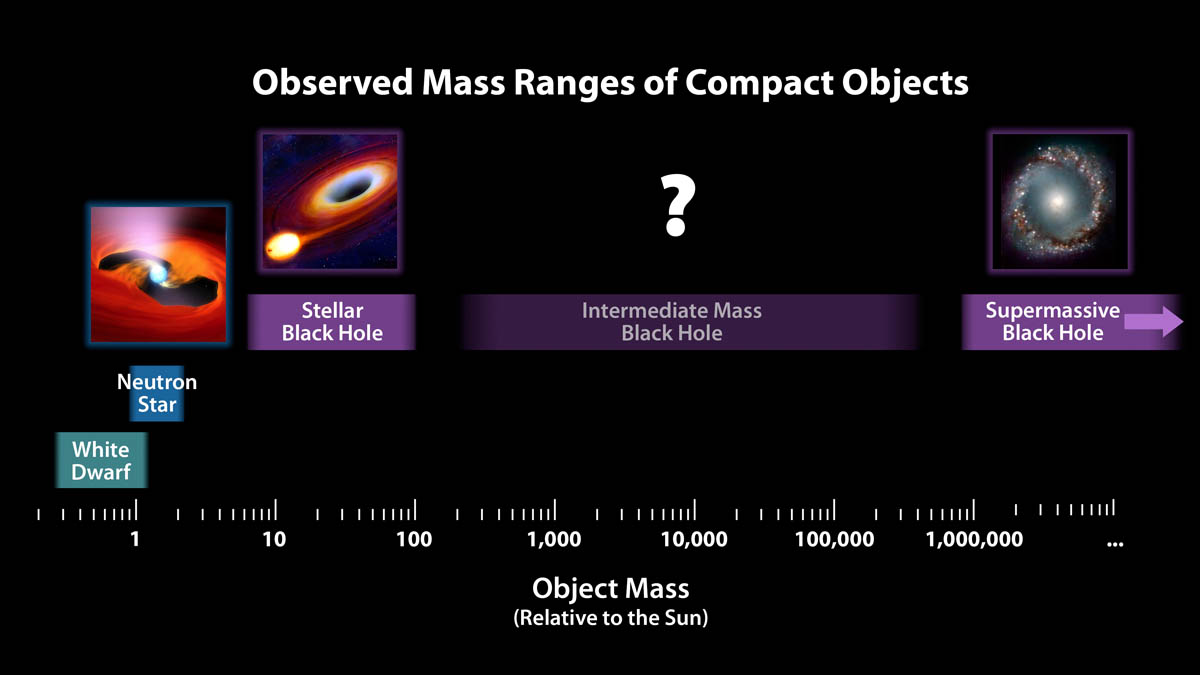 NuSTAR is a Small Explorer mission led by the California Institute of Technology in Pasadena and managed by NASA's Jet Propulsion Laboratory, also in Pasadena, for NASA's Science Mission Directorate in Washington, D.C.

Initially, NuSTAR didn't initially set out to study the two ultraluminous X-ray sources in M82. Astronomers had been observing a recent supernova in M82, when they serendipitously noticed pulses of bright X-rays coming from a point nearby – what turned out to be the ultraluminous X-ray source called M82 X-2. Black holes don't pulse, but pulsars do.

“We took it for granted that the powerful ultraluminous X-ray sources must be massive black holes,” said Bachetti, lead author of the paper. “When we first saw the pulsations in the data, we thought they must be from another source.”

NASA's Chandra X-ray Observatory and Swift satellite had also been monitoring M82 to study the same supernova, and confirmed that the intense X-rays of M82 X-2 were coming from a pulsar.

“Having a diverse array of telescopes in space means that they can help each other out,” said Paul Hertz, director of NASA's astrophysics division in Washington. “When one telescope makes a discovery, others with complementary capabilities can be called in to investigate it at different wavelengths.”

The key to NuSTAR's discovery was its sensitivity to high-energy X-rays as well as its ability to precisely measure the timing of the signals. This timing capability allowed the astronomers to measure a pulse rate from M82 X-2 of 1.37 seconds. They also measured its energy output at the equivalent of 10 million suns, or 10 times more than that observed from other X-ray pulsars – a big punch for something about the mass of the sun and the size of Pasadena.

Astronomers aren't sure why this dead sun radiates so brightly, but they say it is likely due to a lavish feast of the cosmic kind. As is the case with black holes, the gravity of a neutron star can pull matter off companion stars. As the matter is dragged onto the neutron star, it heats up and glows with X-rays. If the pulsar is feeding off surrounding matter, it is doing so at such an extreme rate to have theorists scratching their heads.

Astronomers are planning follow-up observations with NuSTAR, Swift and Chandra to help explain the bizarre behavior. The NuSTAR team also will look at more ultraluminous X-ray sources, and it's possible they could turn up more pulsars. At this point, it is not clear if M82 X-2 is an oddball or if more beat with the pulse of dead stars. NuSTAR, a relatively small telescope, has thrown a big loop into the mystery of black holes.

“In the news recently, we have seen that another source of unusually bright X-rays in the M82 galaxy seems to be a medium-sized black hole,” said Jeanette Gladstone of the University of Alberta, Canada, who is not affiliated with the study. “Now, we find that the second source of bright X-rays in M82 isn't a black hole at all. This is going to challenge theorists and pave the way for a new understanding of the diversity of these fascinating objects.”