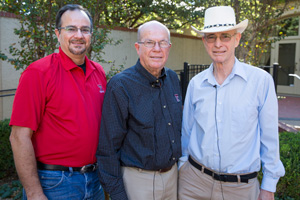 The first time James Charles Featherston set foot on the Texas Technological College campus, he couldn't figure out why someone had built the school so far outside of town.

Now, Texas Tech University serves as an educational hub for students from throughout the world, and its campus boasts a law school, a medical school and an enrollment of more than 35,000.

And Featherston saw it all. The oldest-known alumnus proudly experienced the growth of his alma mater before dying recently at the age of 105.

Born in Stonewall County on Oct. 21, 1908, Featherston lived the majority of his life in Petersburg, growing cotton and raising dairy cows for 75 years. He was married to Ruby Cowan for 76 years before her 2011 passing, and together they raised a daughter and two sons on the Petersburg farm that remains in their family today.

He enrolled at Texas Technological College in 1927, working his way through college by picking cotton and milking cows at the school farm. He left Texas Tech for two years to run the family farm after his father died from a lightning strike, but he returned to graduate with a degree in mathematics in 1933.

A Love for Texas Tech

Featherston was in the fifth class to graduate from Texas Tech.

“He was still a good mathematician,” said his son Mike, also a Texas Tech grad. “He helped me though some of my engineering courses while I was here.”

So far, Featherston's legacy of Red Raiders has spanned four generations. Two of his children and four of his grandchildren attended Texas Tech, and his great grand-daughter Emilie is a junior majoring in computer engineering. 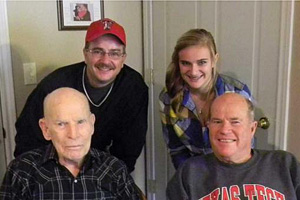 “He was a very fit man,” Barry recalled. “When I was in college he was in his 80s, and every time I came over we had to have a pushup contest. I could never beat him.”

Barry also recalled the time he broke his back in a car accident during his junior year at Texas Tech. He spent three months in the hospital recovering, and his grandfather never left his side.

“Those whole three months, I was never lonely or spent a minute alone because Charles moved their RV out into the parking lot of the hospital, and they spent three months in that RV to be with me and take care of me.”

Featherston said on his 100th birthday that the biggest change in his lifetime was leaving his farm. He also said the key to a happy marriage was kissing his bride and telling her he loved her before going to sleep every night.

“My dad was a role model,” John said. “He was one of those people that carried himself as a role model, whether it was for me or anybody. If you could emulate what he did you were going to be all right. Ethically and morally, that was the important thing.”