The welcoming event took a page from the beloved Harry Potter series. 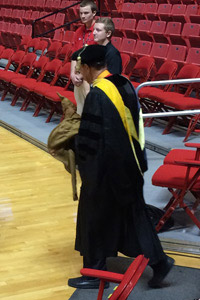 Professor Jim Brink walked silently through the great room, wearing black robes and carrying a walking stick with a hood over its top. Hundreds of students watched in anticipation as he stopped in front of them and pulled the hood off to reveal an owl.

The students cheered as the rest of the Texas Tech University Honors College faculty and staff walked out in robes, mostly black, some purple, with a few carrying hats – witches' hats, to be exact. One carried a patched-up brown hat bearing a marked resemblance to the Sorting Hat of Hogwarts School of Witchcraft & Wizardry.

Magic was the theme at Thursday night's inaugural Honors College Convocation and Sorting in the United Supermarkets Arena, but Harry Potter isn't what Honors College Dean Michael San Francisco had in mind when he brought up the idea of sorting students into houses.

“When somebody asked me, ‘Is this like Harry Potter,' I said ‘no,'” San Francisco told the students. “I was in a house 40 years before Harry Potter was around.”

Of course, once the rest of his staff told him the students would identify more with Harry, Ron and Hermione than with the traditional British educational system, they ran with the idea. Harry Potter theme music filled the arena, professors swapped out their ceremonial caps for pointy hats and esteemed former Headmaster Albus Dumbledore was quoted more than once.

Honors College leadership planned the sorting to increase engagement among its students. Sorting students into houses will provide a greater sense of community and keep them involved, both with each other and the college. Often students don't identify as Honors College students; they focus only on their field of study. The leadership hopes by belonging to houses, students will meet more honors students, forge better relationships with each other and the college, and know they have a place of friendship and support.

“We want you to aspire to acquire knowledge, we want you to work hard and we want you to help one another,” San Francisco said before turning the microphone over to Honors College Associate Dean Aliza Wong, who was wearing Golden Snitch shoes.

She introduced the four houses, named for four Texas Tech leaders who were instrumental in the development of the Honors College and associated with a specific trait, each of which is one of the pillars of the college. 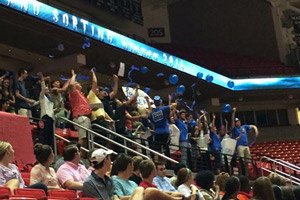 Students were sorted into one of four houses.

“What the Honors College is offering you is the four most amazing years of your life – a life of wonder, a life of curiosity, a life of exploration, a life of giving back, a life of imagination, a life where you can make your own magic,” Wong said. “These houses are your homes. They bring you together. They bind you together in a community in aspiration, in excellence.”

Now that they're in houses, students have opportunities to earn points for their houses and compete for a house cup. Their first opportunity came Thursday night, when each students created the first letter of their house using colored sheets of paper. After much shuffling and laughing, San Francisco picked Haragan House as the winner to the next speaker's dismay.

“Being that I'm speaking for integrity, H was way too easy,” Lawless, who was wearing a tie with owls on it, told the group, earning laughter from most and cheers from his house.

He encouraged students to remember they would always be ambassadors of Texas Tech and the Honors College and to live in a way that exemplified each of the ideals.

“We worked together to get this point, and many, many people, including the people behind me here today, have continued to work diligently to create an outstanding Honors College,” he said. “You will bear that burden to keep it going better and better and increasing the reputation of the college.”

The event was popular among the newly homed students as well, who chanted house slogans and tagged their houses on Instagram and Twitter. Dalton Koehl, a freshman from Corpus Christi who is in Haragan House, said knowing the leadership in the Honors College was invested in the students made a difference.

“I think it's great that all the faculty and staff really care enough to put this on,” Koehl said.

Freshmen Rachel Cook from Houston and Melissa Parham from Lubbock, both in Bell House, knew each other already but said they enjoyed meeting other students at the event. They also grew up with Harry Potter and enjoyed the music, the sorting and knowing the real tradition behind the fictional school.

“It was an amazing experience,” Parham said.