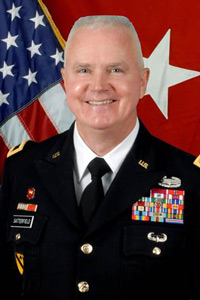 After a long career of serving his country, one Red Raider's service in the Army has come to an honorable end.

Brig. Gen. Douglas Satterfield is a 1978 graduate of Texas Tech University. He joined the Army in 1974, and that ultimately became a deputy commanding general in the 412th Theater Engineer Command.

“I decided to get a military commission as an officer and in 1981 was commissioned a second lieutenant in the Infantry,” Satterfield said. “Then later as a captain, I transferred to the Engineers. With my background in engineering from school and my time in the Infantry, these combined for a perfect match for my career as an Engineer officer.”

Satterfield, originally from various states in the south including Arkansas, Texas and Louisiana, credits Texas Tech with having a positive impact on his 40-year military career. Most of his career was spent as an Army reservist when he held civilian jobs and attended monthly drills and spent two to three weeks in summer training for the Army.

“I was deployed five times,” Satterfield said. “Twice stateside, during Desert Storm and the 9/11 attack, and three times in combat, where I spent three years in Iraq. All deployments, I used my engineering technical skills but also those unwritten attributes gained from going to college.”

During his time in the military, Satterfield received two Bronze Star medals and a Legion of Merit for outstanding work in combat. One of the medals was for being the Engineer who coordinated the 2007 “Surge” in Iraq.

Satterfield retired in May and currently lives in New York with his wife Nancy, with whom he raised four children. Since his retirement he started a book on the history of Engineers in Iraq from 2003 to 2011 with an expected publication date in early 2016. He is also a freelance writer, runs a blog, The Leader Maker on senior leadership and is independent senior military consultant.

“Texas Tech was a great home for me.” Satterfield said. “I am honored to be a Red Raider and to have served my country as well.”

Getting to Know
Douglas Satterfield

I most remember Memorial Circle and the boulevard that extends northward from it.  Many of the buildings I had classes in were in this area.  It was also an area I walked by when going to football games.

What is your favorite thing about being a Red Raider?

Wherever I go and mention Texas Tech, there is always a graduate from there to share memories and good times.  Most often we talk football but also that we were treated like adults.

What is your favorite Texas Tech memory?

I will admit to struggling with my studies.  I had little money and worked part-time jobs while there.  I know it seems too simple, but my favorite memory was graduation.  All my family came from across the US to see me walk across the stage.  I was the first to graduate from college.