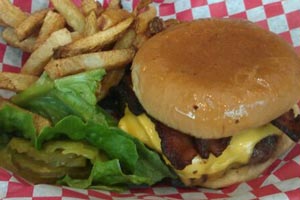 Texas Tech coaches were challenged to design their own signature burgers.

With the help of Adrian Rodriguez, manager of the COWamongus! restaurant inside the Animal and Food Sciences Building under Texas Tech’s College of Agricultural Sciences and Natural Resources, the menu underwent some changes recently. The biggest was to focus on burgers.

But Rodriguez wanted it to be unique.

“We were not sure what direction we wanted to take our restaurant until one morning I decided to make us different from everyone else,” Rodriguez said, “and have people design the menu they want. We took that thought process and narrowed it down to feature Texas Tech as much as possible.” 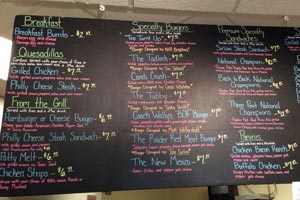 All five signature burgers were added to the menu.

They were tasked with coming up with their own burger, including what they like and discarding what they don’t. About a month later, five signature burgers were on the menu.

“So far the burgers have been received extremely well,” Rodriguez said. “I have been working for COWamongus! since the summer of 2006 and I have never seen this much excitement for a menu change in so long. It’s a breath of fresh air and should allow for us to differentiate from everyone else on campus.”

Rodriguez said the Kingsbury “Too Turnt Up” burger is the early favorite of customers, but “not by much.” He hopes to add more signature burgers in the near future.

“We have several coaches that we could not include because of time constraints, but I hope to add them either as a burger creation or an ice cream creation,” Rodriguez said.

“Too Turnt Up” - Coach Kliff Kingsbury

Complete your COWamongus! experience with a sweet treat. With five flavors to choose from, this ice cream churns out a homemade hit!

To learn more and see how it is made, click here.