Phillip Wainwright performed in a theatrical stunt-fighting and dance group on the reality show. 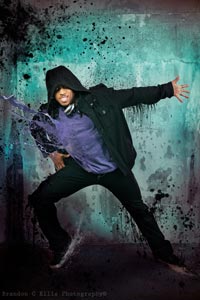 For one Red Raider alumnus, the dance education he received at Texas Tech University just might make him a celebrity.

Phillip Wainwright, a 2012 Honors College graduate, performed in the dance group Mothmen on the reality television show “America’s Got Talent.” The group made it to the quarterfinals of the competition, before being eliminated.

“America’s’ Got Talent is an eye-opening experience,” Wainwright said. “Being led backstage, through Radio City Music Hall, and getting put up in ‘ritzy’ hotels in New York and Beverly Hills really gives you perspective on how the commercial and reality TV worlds work.”

Mothmen is a theatrical stunt-fighting and dance group from the stage show “Beautiful: A Cirque-Tale of how the Butterfly got her wings.” In the show, the Mothmen served as the villains and performed martial arts, gymnastic tumbling and dance skills.

Originating from all over the country, Mothmen members first met three days before their audition for “America’s Got Talent.” The participants range in age from 18 to 35 and have spent most of their lives training and dreaming of performing on television.

"For ‘America’s Got Talent,’ the two directors of ‘Beautiful’, Jason Whicker and Jennifer Kelly, also performed on stage,” Wainwright said. “They decided to spice things up with a hip-hop style and some effects for television. Jason’s forte is aerial harness, so that’s where all the flying comes from.”

While at Texas Tech, Wainwright majored in psychology with a double minor in dance and Japanese. He chose Texas Tech after receiving a scholarship and is happy with his college experience. 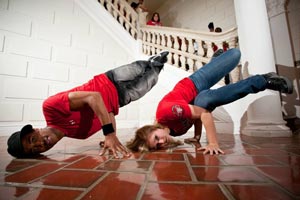 “The things that kept me there were other warm-hearted students, a home-away-from-home feeling, and a wide-open campus with fresh air,” he said.

Wainwright was very involved on campus. He conducted experimental research in the Department of Psychology, completed community service for exemplary programs, was president of Dancers With Soul – the Texas Tech hip-hop team, and spent at least 14 hours per week rehearsing for dance department performances.

Wainwright’s dance career started out as a hobby, but it was during his time at Texas Tech that he was given the opportunity to participate in a master-class taught by the internationally renowned dance team, Pilobolus. From that class, his love of dance deepened, and he became president of Dancers With Soul.

He currently is making the move from his hometown of Austin to Los Angeles. This past year, he spent his time teaching dance classes of all genres including salsa, swing, hip-hop, contact improvisation and Texas two-step.

Wainwright said his favorite part of his “America’s Got Talent” experience was meeting all of the other talented individuals from other acts on the show. 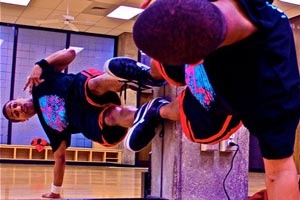 “There are shining personalities everywhere and abilities that can wow you even with just their warm-ups,” he said. “Connecting with people like that is rewarding no matter what kind of person you are.”

From developing time-management skills and budgeting to training for compositional dance works and pedagogical hip-hop instruction, Wainwright said Texas Tech set him up for a bright future.

“Attending Texas Tech helped me accomplish the same goal that every university should strive for its students,” he said. “It gave me the foundation to become a successful person in the career of my choice.”

For more information on Mothmen you can watch the founders of the dance troop on YouTube at https://www.youtube.com/watch?v=3i5sMVT9Gls&feature=youtu.be.

To view the Mothmen’s “America’s Got Talent” performance visit http://www.nbc.com/americas-got-talent/cast/season-9/mothmen-dance.

Getting to Know
Phillip Wainwright

The fountain located in the English and education building courtyard.

What is your favorite thing about being a Red Raider?

Knowing that I am more capable and intelligent than I am expected to be. Red Raiders are a stronger breed than others realize. Fight, fight!

What is your favorite Texas Tech memory?

Rushing the field after beating The University of Texas my freshman year. Twice!

Texas Tech Alumna Feels the Heat in Her Chosen Field