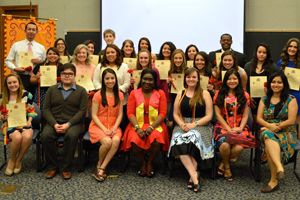 Texas Tech University’s Alpha Phi Chapter of Sigma Delta Pi, the National Collegiate Hispanic Honor Society, has been named an Honor Chapter for its outstanding activities in 2013-14. This is the 10th consecutive year Texas Tech received this honor that was granted to only 12 chapters nationwide.

Associate Professor Comfort Pratt, Texas Tech’s chapter adviser and current national Sigma Delta Pi vice-president of the Southwest, said the recognition is a reflection of the successful collaboration between the chapter and university.

“Sigma Delta Pi has created numerous programs that have benefited the university and the Lubbock community tremendously, including a tutoring service, the Lubbock Spanish Spelling Bee competition, academic lectures, forums, art exhibits and collaborations with the Texas Tech School of Medicine and local schools,” Pratt said. “This has all been possible thanks to the exemplary leadership of our national office, grants from the Office of Vice President Juan Munoz, the Student Government Association and others and the constant support and encouragement of Texas Tech administrators.”

Each May, the nearly 600 chapters of Sigma Delta Pi across the U.S. are asked to submit an annual report detailing their numerous activities and projects from the academic year. Based on these reports, the National Executive Committee chooses approximately 10-15 Honor Chapters annually.

This recognition is based upon the caliber of chapter projects that reflect the Sigma Delta Pi mission of honoring excellence in the study of the Spanish language, contributing to cultural understanding and upholding the goals of the society.

With its national office at the College of Charleston in South Carolina, Sigma Delta Pi is a member of the Association of College Honor Societies, the nation’s only certifying agency for college and university honor societies.