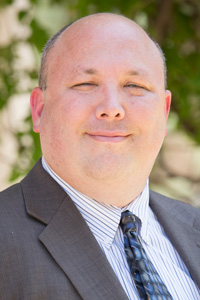 For Sean Donahue, the road to graduation took longer than most. But on Saturday (Aug. 9), 26 years after completing high school, he will receive his bachelor’s degree in university studies from Texas Tech University.

Donahue began his pursuit for a college degree in 1988, and after a variety of factors left him just short of graduation, he returned to Texas Tech in January 2014. His long road will end Saturday at United Supermarkets Arena when he partakes in summer commencement ceremonies.

“Finishing my degree is the culmination of hard work,” Donahue said. “It is like a first drink of water after a hard day’s work in the sun—not only refreshing but satisfying.”

After graduating in 1988 from Fairview Park High School in Ohio, Donahue attended college in New York but wasn’t happy with his experience and the distance from his home. He moved to Texas and worked for Radio Shack until 1991 when his sister passed away from cancer.

“This gave me the motivation to go back to school,” Donahue said. “I came to Texas Tech in 1992 and bounced around from business to mass communications until the birth of my daughter Shelby.”

In order to support his new family, Donahue left school only a few hours short of graduation to work full-time. He currently is the director of digital media and special projects for the Lubbock area at Wilks Broadcasting.

Donahue said he decided to return to Texas Tech after talking with JoAnn Grant, professor in the College of Media & Communications, during halftime of a Texas Tech football game, and Todd Chambers, department chairperson for journalism and electronic media, at the KTXT reunion. Both professors encouraged Donahue to become a part of the social media graduate program that was being created at the time.

Chambers said he has known Sean for several years and had him speak to several of his classes.

“I knew he had worked at KTXT-FM when he was in school; but had forgotten just how involved he was,” Chambers said. “Honestly, when I learned he was still needing a handful of credits, I encouraged him to wrap up his degree and then consider pursuing our graduate program. I’ve been fortunate to see him on a couple of occasions in the past few months and have smiled every time I have seen him – just knowing about this wonderful accomplishment.”

“No one will ever be able to take this accomplishment from me. And I can say with pride, I am a Red Raider.” – Sean Donhahue

Donahue, 44, completed 16 of his last 19 hours online with a 4.0 GPA and said this experience has taught him anything can be achieved with the right support.

“If it was not for the support from my wife, family, friends and some great Texas Tech professors, I may have not attempted this challenge,” he said.

“When I started back, my wife bought me a Texas Tech Alumni sticker to put on my car and told me I could not put it on until I graduated,” he said. “She tacked the sticker right above my computer in my sight line. Whenever I passed my computer and thought of taking a day off, I would see the sticker and sit down to get back to work.”

Donahue said after searching for a university that felt like home, he decided to come to Texas Tech after falling in love with the city of Lubbock.

“It was big enough so I did not feel like I was trapped and small enough where, when you did good things, people noticed,” he said.

Donahue has many tips for those returning to school to finish their degrees, including setting a block of time each day to focus on your goal, setting your ambitions in front of you and communicating what your goals are with your advisors.

“No one will ever be able to take this accomplishment from me,” Donahue said. “And I can say with pride, I am a Red Raider.”

Getting to Know
Sean Donahue

Just outside Jones AT&T Stadium as the band is leaving after a Texas Tech victory, as they march back through campus.

Hearing those Victory Bells after any Red Raider win, especially against Texas A&M or Texas.

Nothing is easy for us. In athletics, academics and any other pursuit, we are challenged by those who may have given the easy road. But when Red Raiders win -- and in the end we will -- being a Red Raider means you earned it.