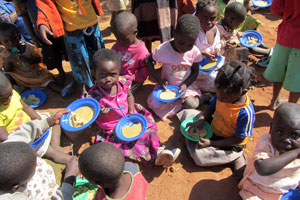 Iron deficiency leads to inability to generate healthy blood and fight off diseases such as malaria.

While sitting in two different seminars about five or six years ago, Mark Miller began to wonder if a big problem throughout parts of Africa couldn’t have a fairly simple solution.

The seminars dealt with iron deficiency in women and children, which prevented them from generating healthy blood to fight off diseases such as malaria. Not even iron supplements made a difference, so after learning more regarding the deaths of these women and children due to iron deficiency, Miller, a professor of animal and food science at Texas Tech University, developed a plan that may have just saved villages in the country of Malawi.

“I teach in my class that many of the women in the United States are iron deficient, and some of them are anemic and need to eat more read meat,” said Miller, who also is the San Antonio Stock Show and Rodeo Distinguished Chair in Meat Science. “Red meat is really good for you. It gives you iron, B vitamins, zinc and many other micronutrients – all the things you don’t get with chicken or other meat products.”

Miller and colleague Malinda Colwell, a professor of human development and family studies, helped institute a sustainable goat production program at the Circle of Hope Grace Center campus in Malawi, Africa, believing the theory of red meat from goats could solve the rampant iron deficiency in the country and, thus, help increase health. 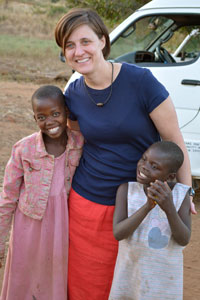 Colwell studied the behavioral changes in women and children before goats were introduced into their diet, and afterward.

Last month, Miller, Colwell and their fellow researchers from the International Center for Food Industry Excellence returned from Malawi where they saw results of their efforts first-hand.

“The very first day we got there you could just see in the kids the visible improvement in their health,” Colwell said. “Before, a lot of them had distended bellies and large cheeks, but now they have a much more typically developed body structure, and we saw a lot more interaction among the kids, more playing and more physical activity than we’d seen in the past. That’s exciting.”

Due to the AIDS pandemic, which Miller said wiped out a large part of the Malawian population between the ages of 17 and 30, the knowledge of animal husbandry from when villagers raised cattle all but disappeared. Because of that, goats were selected as an easier method of re-introducing red meat into their diets.

With the help of the Circle of Hope International, which provides care for Malawian orphans and encourages community development, as well as funding assistance from the Rotary Club International and Texas Tech, Miller and Colwell went to Malawi to not only feed the women and children red meat from goats, but also to teach them how to raise the animals in order to have a steady supply.

First, however, the Texas Tech group established a physical ability baseline for the villagers. That’s where Colwell came in, taking the lead in studying behavioral changes in the women and children from before the goats were introduced to afterward.

“When you’re lacking iron, you’re very listless and don’t have much energy,” she said. “You see that in children. Preschoolers are usually among the most active people developmentally, and (Malawi children) were all sitting down, falling asleep on the ground and not paying attention in school.” 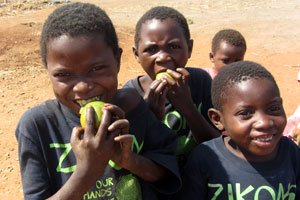 Six weeks into the experiment, there was significant physical change in both the children and the women.

A lack of important micronutrients leads to food insecurity, and in this case the lack of iron results in low hemoglobin levels in the human blood stream. Low hemoglobin levels cause listlessness and a lack of energy because muscles don’t receive the appropriate amount of oxygen. Miller said the prevalence of malaria in Africa, which attacks red blood cells, resulted in numerous deaths in those Malawians already too weak to fight it.

The consumption of red meat from goats improves the health of red blood cells and is why, Miller said, citizens in other African countries like Kenya survived malaria outbreak at a higher rate. Raising goats for food is much more common in Kenya.

The Malawians didn’t take to the project right away, Miller said, because resources were limited. Maintaining a goat herd requires food and water, which was scarce for the Malawians themselves much less for any livestock. Plus, water is also needed to raise traditional corn crops that provided a main source of food, a corn-based paste called Nsima.

“They weren’t eating but once a week or twice a week themselves, so how often would they let the goats out to eat?” Miller said. “They kept the goats penned up from predators or from someone stealing them, and there was not water in the pen for them. If the women are hauling water on their heads to keep their family alive, how much are they going to do that for the goats?”

Eventually, however, the effort caught on. A selected group of 34 women of childbearing age and 47 children ages 2-5 were the central focus of the experiment. The Texas Tech team took basic measures of their social, emotional, physical and cognitive and pre-language development to track changes as they were fed goat meat. 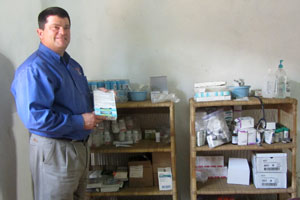 The results were almost instantaneous. Six weeks into the experiment, there was significant physical change in both the children and the women. When other villages noticed the difference, the interest as well as the importance of maintaining a goat herd grew. It also became a source of income as some villagers sold goats for roughly $50-$60 (Malawians earn about 60 cents per day).

Colwell said she and Miller continued to receive reports every three months, and the longer the program went, the healthier the Malawian women and children became.

“One of the things we found was the kids interacting with one another and how aggressive they were,” said Colwell, pointing out that the aggression was not violent but normal aggressive behavior exhibited by healthy preschoolers.

“It was appropriately developmental aggression. It showed they had the energy to engage. The children are showing increased social interactions, increase in physical agility and attention.”

Miller and Colwell returned from a 10-day trip to Malawi in late July, and both were ecstatic about not only how far the program and the Malawians have come in a year, but what the future holds.

“From the standpoint of the production of the goat herd … we’ve seen amazing improvement in the last year,” Miller said. “The good thing about that is that they’ve had all this improvement and we aren’t there. We’ve been able to see those improvements and changes because of the education and the training that was implemented while our students were there, and then they’ve implemented it themselves.” 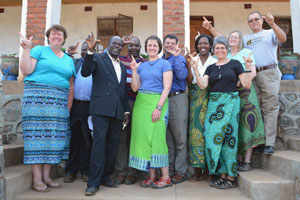 Miller and Colwell returned a year later and were impressed at how far the Malawians had come - and what the future could hold.

Part of the trip also involved meeting with faculty and administrators from a pair of Malawian universities along with the Rotarians and the Circle of Hope to discuss the next steps in the project. But the Malawians are so excited about what has happened so far, Miller said, that they want to start taking bigger steps.

“We were kind of shocked, in a positive way, that when we were having the meeting the University of Malawi came in with a list of items, wanting to do this, wanting to put people here,” Miller said. “They feel they can have a permanent staff here, students here and do all these things, so in the future we’ll be able to have extension-type activities. We’ll be able to train people in many villages across the area and the region about how to grow and develop goat herds, why they need them and how frequent they need to consume the goat meat to make sure their health is improving.”

Miller said the Malawians are so committed to this project they’ve taken a building at one of the universities that was being renovated for other uses and dedicated it to this project, designating office spaces and classroom space within the building.

“The people from the Malawi universities see the effects of the goat meat consumption, too,” Colwell said. “They can help us disseminate that knowledge throughout the country and villages. Once that’s done, they can make recommendations for the amount of goat meat that needs to be consumed, and hopefully we’ll see healthier development across multiple villages.”

Colwell and Miller said that in the fall they also hope to bring some Malawian officials to Texas Tech to help train and educate them about the program so that there can be permanent program directors in Malawi year-round. It would be a partnership between Texas Tech, the two Malawian universities, the Circle of Hope and Rotary International, but Miller and Colwell must first get approval from Texas Tech.

Colwell and Miller said the Circle of Hope has been crucial in helping his group earn the trust of the Malawian people, and that hopefully the program can be expanded to other villages as well. Their goal is to raise $10,000, which would help expand the program by supplying five additional villages with 50 goats each.

They added that for the project to continue 10 years from now that it has to have the cooperation of the Malawi people, who have been tremendously receptive so far. But if the project ends in 10 years, which he doesn’t anticipate because, “We don’t see food insecurity and iron deficiency going away,” it will be because the goat herds have grown exponentially and the Malawians have become self-sufficient in raising and consuming red meat.

“If we can teach them to sustainably raise these goats, then they can get that red meat in their diet, and that can have a huge impact on their quality of life, their sustainability of life and their healthfulness,” Miller said. “That’s basically what the project is all about.”

And this is just the beginning.