They remind consumers to trust only those building materials tested to withstand high tornadic winds. 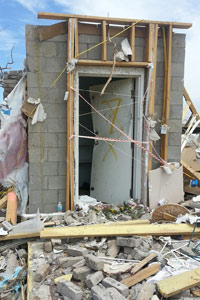 This door attached to an above-ground shelter failed during an EF-4 tornado in Arkansas on April 27, resulting in one death.

When building an above-ground storm shelter, or any shelter for that matter, make sure building materials are rated to withstand high tornadic winds and the onslaught of debris those winds can bring.

Especially when it comes to selecting doors.

That’s the tragic take-home message two Texas Tech University wind researchers want homeowners to receive after completing forensic testing on a door that failed earlier this year during a tornado in Mayflower and Vilonia, Arkansas. The April 27 EF-4 twister generated winds estimated at 166-200 mph that took the life of one person inside the above-ground shelter and 12 total.

In Phase I of the project, researchers at Texas Tech took the door apart and discovered that, while the door was well-built, it wasn’t intended for storm-shelter application, prompting scientists to wonder how many other storm shelters may be equally unequipped. The forensic work performed on the door was witnessed by experts in the door and hardware industry.

“The door is a critical component of an above ground storm shelter and also an expensive component,” said Ernst Kiesling, research professor at Texas Tech’s National Wind Institute (NWI) and executive director of the National Storm Shelter Association (NSSA). “To be effective, the door must be able to withstand wind-induced pressures as well as windborne debris. Hardware including latches, hinges and deadbolts must also be chosen carefully to assure reliability in storm shelter applications. The entire door system, including frame and hardware, should be proven by testing to be appropriate for storm shelter application.” 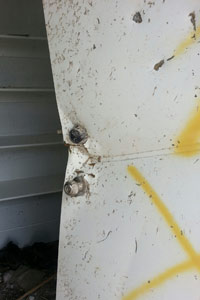 A closer view of the door in question.

The NSSA currently is working with Kiesling and Larry Tanner, a research assistant professor at the NWI, at the Debris Impact Test Facility at Texas Tech. There, scientists hope to address a serious problem in the storm shelter industry: installing substandard, untested doors in above-ground, site-built storm shelters.

Tanner, who also manages the Debris Impact Facility, said Texas Tech has been involved in the development of above-ground storm shelters since the early 1970s when the concept was introduced by Texas Tech researchers. The NSSA came into being in 2000 and has as its primary purpose the fostering of quality in the storm shelter industry.

“Members of NSSA were able to secure the door and deliver it to our laboratory,” Tanner said. “We knew immediately upon seeing the actual door that it was an untested unit. This door was not manufactured for storm resistance, but rather for general home security. Tornado door assemblies (door, frame and hardware) are tested to resist wind pressures and debris impacts from an EF 5 ground speed tornado of 250 mph. These are the FEMA P320/P361 and ICC/NSSA-500 criteria. Parts are not interchangeable. Each proposed assembly by the manufacturer or supplier, must be tested for resistance to the criteria.”

The death of the person in Arkansas is a wake-up call for the storm shelter industry, Kiesling said, and hopefully the industry now is receptive to reliable information supported by professional demonstration. 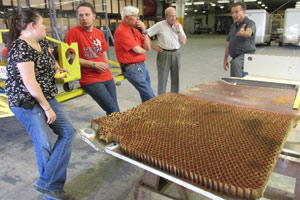 A view of the door after it was dissected by Texas Tech researchers.

In Phase II of the project, Texas Tech researchers will use a state-of-the-art debris launcher and high-speed photography equipment to characterize and demonstrate the failure mechanism of doors that are unable to carry tornado-induced wind pressures and debris impacts. They also will show successful performances.

Finally, in Phase III, researchers will develop strategies and hardware to modify untested, substandard doors that have been installed that lead users to a false sense of security. Results will be made available to the public, hopefully informing users of the importance of using tested doors for storm shelter applications.

“In talking with industry representatives, we learn that the practice is rather widespread in constructing above-ground storm shelters to use lightweight, relatively inexpensive doors,” Kiesling said. “We hope to add clarity to the availability and selection process for shelter doors. Results will be reported in professional publications, presentations and through the media.”