Autumn Shafer, Rebecca Ortiz focused more on communications than medical in their research. 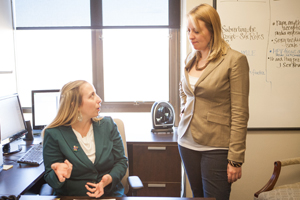 Professors Autumn Shafer, left, and Rebecca Ortiz, are studying the most effective ways to spread the message that the HPV vaccine provides numerous benefits to young girls and boys.

Even with the widespread prevalence of HPV, the thought of children taking the vaccine carries a stigma for some parents because they must admit their son or daughter has become, or is close to becoming, sexually active.

It’s that information roadblock a pair of Texas Tech University professors are working to overcome by taking more of a communication angle rather than a medical one to spread the word that getting young people vaccinated is a good thing.

“There are studies that show that those who do get vaccinated have lower rates of HPV,” said Professor Rebecca Ortiz in the Texas Tech College of Media & Communication. “There seems to be enough literature to say it’s effective, that it really does do what it’s supposed to, and yet, there’s this confusion about getting it. There are some people who are just not comfortable with vaccinations, or there also is an issue with the fact it is directly related to a sexually transmitted disease.”

To overcome that stigma, Ortiz and colleague Autumn Shafer, also a professor in Media & Communication, have studied the most effective ways to spread the message that the HPV vaccine provides numerous benefits to young girls and boys.

The partnership started when both attended a seminar at the University of North Carolina, where both professors earned their doctorate degrees.

This past year, Shafer was invited to speak at a summit in Houston that dealt with cervical cancer, and numerous doctors, health practitioners, nurses and community health workers were in attendance.

“They wanted to know tips on talking with parents about the vaccine,” Shafer said. “So I was the communication person there to talk about messaging.” 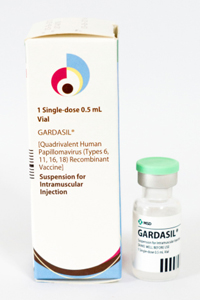 Gardasil is one HPV vaccine that was approved in the U.S. on June 8, 2006 by the U.S. Food and Drug Administration.

Shafer said HPV is so common roughly 80 percent of sexually active people will contract it in their lifetime, though in most cases it clears up on its own.

Shafer left the summit wanting to discover why parents didn’t take more advantage of a readily available HPV vaccine, the virus that can lead to cervical cancer in women. With the help of a grant, they developed a study where, over the course of three months in four North Carolina counties, communication on the benefits of HPV vaccination were increased in hopes of educating parents about the vaccine for girls. Shafer said the vaccine, at this point in 2009, had not been approved for boys.

The duo worked with doctors, sent out messages, put up posters, distributed brochures, all in an effort to increase communication of the virus and its vaccine. Shafer and Ortiz also worked with the state health department to access vaccination records to determine patterns before, during and after the study.

Once the HPV vaccine was approved for boys, Shafer and Ortiz started a second project to study the effectiveness of the message on males. First was the effort to make sure parents knew the vaccine was available for boys since HPV is largely considered to affect just females.

In this study, Shafer and Ortiz worked with a clinical doctor in North Carolina. They’d spend 10-15 minutes asking parents and their kids to look at messages and provide feedback.

“Where the projects before were focused on talking to the parents, now we’re working on some projects where we’re talking directly to the teens,” Ortiz said. “We find, increasingly so, especially in certain populations, that a lot of these kids are making their own health care decisions themselves. We’ve got a couple of collection projects now and we’re in the middle of data collection on one of them to see what are the strategies we can use so that the kids can be just as informed, or more informed, than the parents.”

Bringing it to Lubbock

The research grant for Shafer’s and Ortiz’s second study conducted in North Carolina ended in June, but the project is still ongoing, collecting data in an extension of the grant at no cost. She said they’re hopeful to have all data in hand by December and present final numbers then.

Currently, they are assisting Texas Tech Dean of Students Amy Murphy, who serves as the managing director of the Center for Campus Life, in research to prevent sexual assault. But they’d love someday to continue their HPV research in Lubbock and Texas Tech. 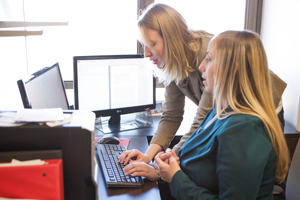 Shafer and Ortiz are now bringing their research findings to the Lubbock community.

“We know there are a lot of people in Lubbock and from the surrounding communities that get health care in Lubbock who could benefit from this type of information,” Shafer said.

The advantage the two had in North Carolina that they would have to build in Lubbock would be working directly with a physician or possibly with faculty from the Texas Tech Health Sciences Center in order to have access to vaccination records. They’ve also made connections with physicians in Houston and are exploring a grant to conduct the same study in connection with the MD Anderson Cancer Center.

“What’s important to understand about the vaccine is that you need to get it before you’re sexually active for it to be effective,” Ortiz said.

“The point is to get it done,” Shafer added. “That’s one of the things we’re trying to communicate. Getting the vaccine when you’re young is vital.”