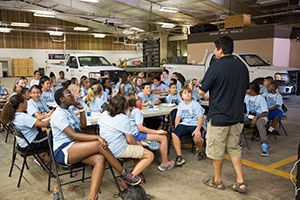 The free camp increases awareness about the need for more math and science graduates.

“While being a counselor, you get to meet all of these kids with great dreams,” Alejandro Trevino said as he surveyed the students. “You get to see the light in them that you help bring out.”

It was students like Tyler Hairston, a seventh grader from Lubbock Cooper, who Trevino likes working with in hopes that they will chase their dreams no matter what they might be. Two weeks ago when Hairston came to Texas Tech University for the EMBHSSC, he never thought his knowledge for science would grow so much throughout his time here.

“I wanted to come to this camp because I wanted to be more educated,” Hairston said. “We’ve been doing projects on potential and kinetic energy, roller coasters and wind energy. My favorite part is meeting new people who share the same interests with me and all of the hands-on learning we’ve been doing.”

Along with Hairston, 45 aspiring STEM (science, technology, engineering and mathematics) field students from the South Plains area visited Texas Tech for EMBHSSC, a free, prestigious science camp for students in the sixth, seventh and eighth grades. Created by The Harris Foundation in partnership with ExxonMobil, the camp was created to “increase the awareness about the need for more math and science graduates, especially among underrepresented populations.” Texas Tech was one of the 20 universities in the nation chosen to host the camp.

“The camp has been an amazing opportunity to promote the capability Texas Tech has in preparing future STEM leaders,” said Isaac Flores, interim assistant director of Texas Tech’s Institute for the Development and Enrichment of Advanced Learners and EMBHSSC camp director. “It was an honor for Texas Tech to host this prestigious camp.”

EMBHSSC’s theme at Texas Tech was “Mind Blown,” where students learned specifically about wind energy and how important it is in society today. Throughout the two-week camp, students visited various places in Lubbock and on the Texas Tech campus. Students built model wind turbines at Texas Tech’s National Wind Institute at the Reese Technology Center, created solar ovens at the Edward E. Whitacre Jr. College of Engineering, learned how wind affects athletes while running at Jones AT&T Stadium, and most importantly, they learned about wind engineering and why the development of clean energy sources are important. Students immersed themselves in various STEM activities, experiments, projects and field experiments to provide applicable and hands-on learning.

Founder of The Harris Foundation, Bernard Harris, Texas Tech Health Sciences Center alumnus and former Board of Regents member, made an appearance through Skype to the camp participants toward the end of the two-week camp to talk about his careers in the STEM field and his adventures as the first African-American to walk in space. 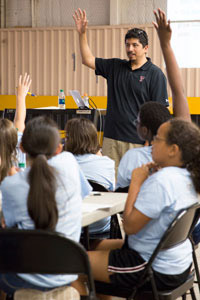 The goal is for kids, especially minorities and underrepresented groups, to realize their potential and pursue their dreams.

“Being the first African-American in space was such an important moment, but back then I said, ‘I might be the first, but I won’t be the last.’ Since then there have been many other African-American astronauts to follow,” Harris said. “I believe that each and every one of you has the ability to do anything you want. You were born with a certain skill. This program is about learning these skills. That’s what education is all about.”

According to The Harris Foundation website, Harris teamed up with ExxonMobil in 2007 to help youth “develop and achieve their full potential through the support of education programs,” especially in the STEM field. The goal of the camp was to “empower individuals in particular minorities and others who are economically and/or socially disadvantaged to recognize their potential and pursue their dreams.”

Since its beginning, EMBHSSC has worked with more than 7,000 students, 3,400 schools and 600 teachers all relating to science, technology, engineering and mathematics. The Harris Foundation and ExxonMobil selected the camp participants through an application process and split the participants equally between boys and girls.

Harris created The Harris Foundation after building up a strong résumé in the STEM field as a medical doctor, astronaut, pilot and businessman, and then later teaming up with ExxonMobil to increase awareness and education about the STEM field. Harris has always believed that “education and effort will allow anyone to meet any challenge in life, inspiring to reach for the stars,” which is the backbone of the foundation.

While learning about different areas in the STEM fields, from building circuits and how to land in space, staying on the Texas Tech campus enabled the students to get a taste of the college lifestyle and build strong interpersonal relationships with other students and the counselors.

Now that the camp has come to a close, the students have had the chance to learn about various things in STEM, including how to land in space, why wind energy is important to our society, how wind affects athletes and how kinetic energy works with rollers coasters. Flores, EMBHSSC camp director, was honored for Texas Tech to host the camp and enjoyed the students’ eagerness to learn.

“The students were outstanding inside and outside the classroom, gaining first-hand knowledge of wind energy and a first-hand experience of college life,” Flores said.