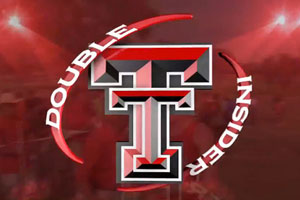 The Double T Insider, a student-run sportscast produced in a partnership between the Texas Tech University College of Media & Communication and the athletic department, will air this season on both Fox College Sports and Fox Sports Southwest, the college announced Tuesday.

“This program will provide media and communication students with real-world production experience while informing Red Raider nation about the achievements of our student-athletes,” said David Hougland, Texas Tech director of broadcast services.

The Double T Insider airs weekly recapping news and features on Texas Tech athletics. It is entirely directed, filmed and edited by students in the College of Media & Communication in partnership with Texas Tech athletics and has been recognized as an award-winning production. In its first season in 2012, the show was nominated as one of the top six college sports television shows by the College Sports Media Awards. 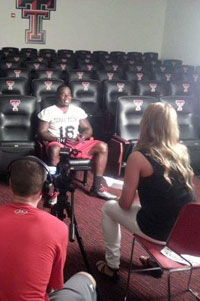 The program allows students to earn valuable real-world experience in preparation for entering the workforce after graduation.

“At some schools, you don’t get to start doing anything until your junior or senior year,” said Blake Silverthorn, director and student manager of The Double T Insider. “By the time students are sophomores or juniors, they have enough experience to mentor the new DTI members.”

The show began as a weekly feature on YouTube before being broadcast in the Lubbock, Amarillo and Midland television markets. It will now be broadcast exclusively on the Fox Sports affiliates, which will further expand the university’s athletic reach.

“We stand to gain a much larger audience, especially in areas like Dallas-Fort Worth, where our alumni base is huge,” said Josh Robinson, media production manager for the College of Media & Communication. “With Fox Sports Southwest, we can get into the Dallas market, the Austin market and the Houston market.”

“We want the transition of our students from the classroom to the workplace to be as seamless as possible,” said David Perlmutter, dean of the College of Media & Communication. “We know getting creative professional experience while at Texas Tech is crucial to their future. The Texas Tech sports-DTI partnership is a model of what our majors can achieve.”