Texas Pipeline Association commissions university for first ever analysis of this kind. 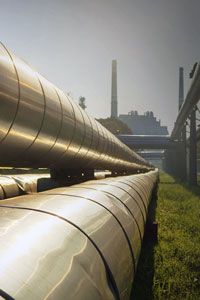 A group of four Texas Tech University professors were the driving forces behind a report commissioned by the Texas Pipeline Association (TPA) to show the economic impact the Texas oil and gas pipeline industry has on the state.

Bradley Ewing, a professor in the Rawls College of Business who specializes in the areas of energy, economics and law, led the group, which concluded that, in 2013, the pipeline industry contributed $33 billion in economic impact. The report also stated that the pipeline industry supports more than 165,000 high-paying jobs, added $18.7 billion more in gross state product and injected $1.6 billion in state and local government revenues.

This marked the first time the TPA has commissioned an economic impact report, and having Texas Tech faculty work on the study signifies the importance of the industry to this part of the state.

“It indicates we are recognized by the energy industry as leaders/experts in energy-related research,” Ewing said, “specifically in energy economics and petroleum engineering where we are able to conduct inter-disciplinary research in new ways.”

The report also estimates that, over the next 10 years, the pipeline industry will contribute more than $374 billion in total economic impact, sustain 171,000 high-paying jobs annually, add more than $212 billion in gross state product and inject more than $19.5 billion in state and local government revenues.