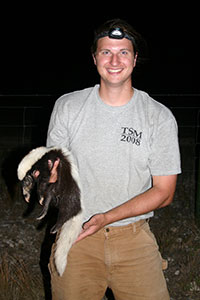 While they may not look like skunks of a different stripe at first glance, a Texas Tech University graduate student recently found that American hog-nosed skunks (Conepatus leuconotus) feature different striping depending on physical attributes of their habitats.

Adam Ferguson, a doctoral student in the Department of Biological Sciences, discovered that hog-nosed skunks living in environments with greater canopy cover and more stable temperatures feature less white fur and more black along their backs compared to those that live in environments with greater temperature variability, such as the Desert Southwest, where skunks possess greater areas of white fur.

His presentation earned him the 2014 Wilks Award from the Southwestern Association of Naturalists for his presentation “Skunks at the Crossroads: Assessing the Interplay Between Environmental Morphological and Genetic Variation in the American Hog-Nosed Skunk.” The award, established in 1964, is presented to the student giving the best oral presentation during the annual meeting of the association.

“This project was the first of three chapters for my dissertation,” Ferguson said. “It actually started as a side project whereby I was interested in developing a method for quantifying dorsal stripe variation in order to see if the patterns were non-randomly distributed in geographic and environmental space. I’m humbled that the association decided to honor my work in this way.”

Since the 1830s, scientists classified hog-nosed skunks with different striping as separate species until DNA testing about 11 years ago found the skunks were genetically identical. 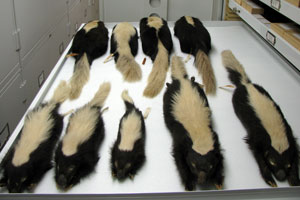 American hog-nosed skunks feature different striping depending on physical attributes of their habitats.

Ferguson said he began studying skunks while working with Robert C. Dowler, a professor at Angelo State University, and salvaging road-killed skunks for the Angelo State Natural History Collection. This long-standing tradition of skunk collection has created one of the largest holdings of skunk specimens in Texas and beyond, he said.

By using the specimens collected as far back as the 1890s, Ferguson quantified the variation in the stripe patterns in this species. This would not have been possible without the efforts of more than 72 collectors and 17 collections that housed such specimens for the past 125 years, he said.

“After seeing my first Conepatus leuconotus up close and personal (they are quite common around the San Angelo area), I started doing a little research and realized we knew little to nothing about the ecology and evolutionary history of this species,” he said. “It was all downhill from there. I pursued several avenues of research, including studying their behavior with radio telemetry before settling on a detailed investigation of their evolutionary history and geographic distribution. My specific interest in the white color pattern did not develop until my third or fourth year of working with these guys when I was trying to come up with a way to use museum specimens to ask pertinent questions about small carnivore evolutionary ecology.” 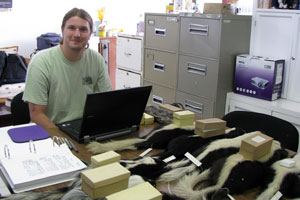 Ferguson's presentation earned him the 2014 Wilks Award from the Southwestern Association of Naturalists.

Ferguson and his advisor, Richard E. Strauss at Texas Tech, examined these fur patterns to see whether or not they were randomly distributed across the species’ geographic range and if patterns could be explained by local environmental conditions, implying an adaptive role in this species.

“I was pleasantly surprised at how efficiently our method captured the nuances of variation in dorsal stripe patterns, and that such variation could be significantly related to local environmental conditions,” he said. “I would certainly like to make an explicit and shameless plug for natural history collections and the need for specimen-based research. There are countless examples of how museum specimens provide information vital to answering important questions regarding Earth's biodiversity, and this study just adds to that pile.”

The Southwestern Association of Naturalists is an international association of scientists, educators and students founded in 1953 to promote the field study of plants and animals (living and fossil) in the southwestern United States, Mexico and Central America.