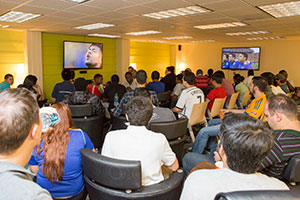 Their plane tickets are purchased, and now they wait. Well, wait and cheer their hearts out.

Most Brazilians don’t need extra incentive to cheer on their national soccer team in the World Cup, but three Texas Tech University student-athletes from Brazil hope their squad can at least advance to the quarterfinals.

Brazil is hosting the World Cup this year, and Francisco Zambon, Felipe Soares and Hugo Dojas, all members of Texas Tech’s men’s tennis team, will watch the first three weeks of the tournament from Lubbock. But when final exams for the first summer session end on July 3, all three will fly back to Brazil the very next day.

“We’ve already checked the schedule, and if Brazil makes it to the quarterfinals, we will be back in time to watch it,” said Dojas, a sophomore business major from Ribeirao Preto, Brazil. “This is the most important thing going on in Brazil right now. Everybody has talked about this for the last four years.”

The trio won’t actually get to attend matches once they get back home — tickets have been sold out for months and the few available are now being resold for thousands of dollars. But being back with fellow Brazilians and thousands of visiting soccer fans from around the world is sufficient enough.

“It’s going to be one big party, and I can’t wait,” said Zambon, a junior business major from Campinas, Brazil. “It’s kind of like the Super Bowl but bigger. When Brazil plays, everything closes — even the schools — so everybody can watch.”

Of course, the trip home will be much more exciting for the three Red Raiders if Brazil has not been eliminated from the tournament. They’ll do their best to support the team’s success by cheering from Lubbock, just like they did in Brazil’s 3-1 victory over Croatia in the World Cup’s opening match. 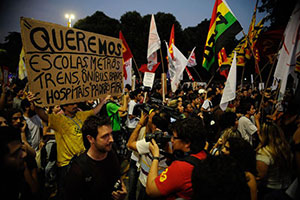 “We’re going to make it as exciting as we can,” said Soares, a sophomore business major from Santos, Sao Paulo, Brazil. “We all get together with other Brazilians, make a little (Brazilian) barbecue and just have a good time. And of course, we’re going to win all our games.”

Diego Rodrigues and Aldo Torres also are Brazilian students at Texas Tech, but they’ll be in Lubbock throughout the entire World Cup. Rodrigues, from Vitoria, Brazil, earned a one-year scholarship to study computer engineering at Texas Tech through the Brazil Science Without Borders undergraduate program. Torres, from Amparo, Brazil, came to Texas Tech to obtain a doctorate in natural resources and is also with the Brazil Science Without Borders program.

While both students are excited about watching Brazil compete in the World Cup, they also are concerned with all the money their country has devoted to hosting the event. They’re not alone, as many Brazilians are protesting the government for spending $11 billion on the World Cup instead of improving healthcare, education and highway systems.

“I have nothing against the World Cup, I just wish it wasn’t being hosted by Brazil,” Rodrigues said. “Most people don’t know about the issues we have in our country right now and, sadly, this World Cup is probably going to make people forget, especially if Brazil wins the tournament.”

Torres still plans on watching the games and rooting on the national team, but that’s mostly because of his love of soccer. He currently is a member of the Texas Tech soccer club.

“I have nothing against the World Cup, I just don’t like the corruption involved,” he said. “Of course, I’m going to watch, but I’m also going to be a little sad for my country and those who are suffering.”