Brian Quinn recognized for “The McDonaldization of Academic Libraries?” 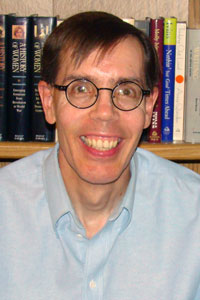 Texas Tech University librarian Brian Quinn is among an elite group of seven librarians whose research articles recently were selected for the 75th anniversary issue of College & Research Libraries (C&RL). His contribution was among 30 finalists identified by the editorial board and past C&RL editors, who then asked the membership to vote for the seven they considered to be most significant.

The chosen article, “The McDonaldization of Academic Libraries?” and its sequel, “McDonaldization in Cyber Space: Examining Commercial Education Websites,” generated an overwhelming response from librarians around the world. It was translated into Chinese and published in one of the leading library journals in China.

“I honestly did not think anyone would have the nerve to publish it, much less the most important journal in the library field,” Quinn said. “It is the library equivalent of Upton Sinclair’s The Jungle or Orwell’s 1984 and manages to offer a dark dystopian critique of contemporary librarianship yet also a hopeful alternative. It struck a nerve with librarians, and still does almost 15 years later. If anything, libraries are more McDonaldized than ever, but the best librarians understand the downside of bureaucracy and manage to accomplish great things by keeping it in perspective.”

Quinn is the social sciences librarian for the Texas Tech University Libraries. He earned bachelor’s and master’s degrees in sociology from Adelphi University and attended library school at the University of Illinois.

The Association of College & Research Libraries (ACRL) is the largest division of the American Library Association. A professional association, the ACRL represents librarians and others working to enhance the academic missions of higher learning institutions and to advance the overall improvement of learning, teaching and research.

“The 75th anniversary of the journal and the association provide us with a rare opportunity to consider the importance of scholarship to our data-informed profession, and to reflect upon the inspiration and guidance that generations of leading researchers and scholarly practitioners have given to each of us in our work,” said Scott Walter, editor-in-chief of the C&RL editorial board.

The 75th anniversary issue of the journal will be published in March 2015 and discussed at the ACRL 2015 Conference in Portland, Ore.