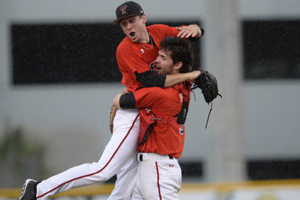 The Texas Tech University baseball team has put together a historic season ... and it's not over yet.

The Red Raiders will host the first NCAA Super Regional in school history this weekend, and will take on the College of Charleston at Dan Law Field at Rip Griffin Park. Tickets for the weekend series sold out in less than an hour Tuesday.

The best-of-three series will begin at noon on Saturday followed by Game 2 at 2 p.m. on Sunday. If a third and decisive game is needed, that game will be played at noon on Monday. All games will be televised nationally on ESPNU.

Texas Tech advanced to its first NCAA Super Regional after defeating top-seeded and host Miami 4-0 in the regional final in Coral Gables, Fla. The regional championship is the first in school history.

For full coverage of Texas Tech's victory in the regional championship click here.