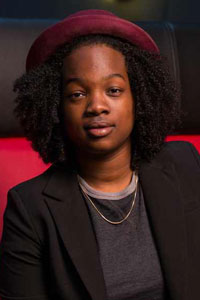 Adams is fourth in the state for youth poets.

Robyn Adams has competed internationally with the best of the best in youth poetry and performed in front of sold-out crowds at the most prestigious venues across the country.

With all the success she’s experienced, it’s hard to believe this Texas Tech University student is only 20.

A mentor first encouraged Adams, a sophomore journalism major from Houston, to write when she was 16. After becoming involved in a local Houston youth creative writing organization, she was one of four selected to compete in the international poetry competition Brave New Voices featured on HBO.

“Just the experience to compete with kids from all different areas was invaluable,” Adams said. “Hearing other people’s stories and being able to share my own with them is something that just became a passion.”

Since then, Adams has performed in some of the most iconic venues in the country, including the Apollo Theater in New York City. Most recently, she performed at Texas Tech University’s inaugural TedxTexasTechUniversity conference.

“I mostly write about the things I see or things I’ve experienced,” Adams said. “A lot of people’s poetry is different, and even though it might be totally different than yours they’re both equal in its meaning.”

Adams credits the professors in the College of Media & Communications for helping her develop her writing and she hopes to do the same for others. During the summers, she interns at Writers in the Schools and Rice University’s Creative Writing camp and hopes to be a coach for the youth poetry team in Houston.

With her passion for poetry, Adams believes students should see beyond standard curriculum and try and think more creatively. This has inspired her to form a poetry slam team at Texas Tech, which will start competing in the fall.

“The only other school in the state of Texas that has a team is the University of Texas,” Adams said. “I’m really hoping this will be Texas Tech’s chance to bring in a team focused on creativity.”

Getting to Know
Robyn Adams

What’s your favorite spot on campus?

I would have to say the Student Union Building.

My favorite tradition is holding up the Guns-up sign at the games when the players run out.

I like the community here on campus; a lot of people are friendly and open to meeting new people from all different cultural backgrounds.