John Salter was selected as one of the top Financial Planners under 40. 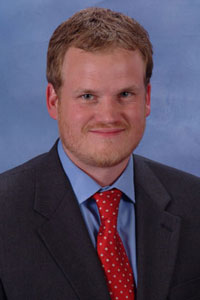 Nominated and chosen from 1,200 nominations, an associate professor in Texas Tech’s College of Human Sciences was named to the Investment News’ Top 40 under 40 List, which consists of up-and-comers impacting the financial planning profession in different ways.

John Salter said he believes his dual roles as both a practicing financial planner and professor helped him stand out in the selection process.

“I love what I do on both sides, working with people and working with the students,” Salter said, “It’s the perfect package.”

Salter found out about his nomination in May and had to keep it a secret until the list was published. He said he was pleasantly surprised when he found out he received the honor.

“There are a lot of talented financial planners under 40, and I was happy to make the list,” Salter said.

Receiving the honor of being on the list makes Salter feels he is making an impact and his hard work is paying off. He said being on the list will help him to continue to push forward and be better at his job.

“If you work hard, recognition comes,” Salter said. “It means even more to be recognized and on a list amongst peers, acquaintances and friends.”

Salter thinks being named to the list will solidify the reputation of Texas Tech having the best financial planning program and bring recognition to what he calls an already stellar program.

“If you love what you do, you never work a day in your life,” Salter said, “I don’t feel like I’ve worked a day with my years.”

Salter began teaching at Texas Tech in 2005 and practicing at Evensky & Katz Wealth Management in 2007.

Along with Salter, alumni Laurie Belew and Luke Dean, and Doctoral student David Blanchett were named to the list. A luncheon was held June 2 in New York to recognize the honorees.

Retirement Rule of Thumb or Thumb’s Down?