On Flag Day, faculty and staff speak about the flags they keep in their offices.

June 14 is Flag Day, a day in which the nation commemorates the adoption of the U.S. flag in 1777. The American flag can be seen flying high in Memorial Circle on the Texas Tech campus as well as in offices, classrooms and residence halls. Faculty and staff members display flags in their offices that have special meanings to them. 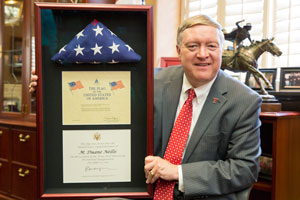 President M. Duane Nellis has an American flag on his wall in the president’s office that was flown over the U.S. Capital on Dec. 11, 2013, the day of his inauguration. The flag was presented to him by Rep. Randy Neugebauer, R-Texas.

“I’m proud of being an American and this flag represents the sacrifices that many have made to allow the freedoms that we have in our country, and I am very proud to have it on display in the president’s office.” 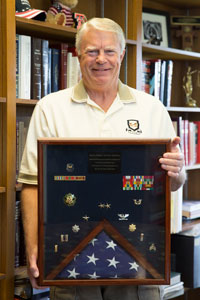 For Walter Huffman, professor of law, the American flag represents the ideas the country was founded upon.

“Flag Day and the American flag have always had special meaning for me because I associate our flag with those values expressed in our national anthem:  ‘the land of the free and the home of the brave.’” said Huffman, a retired U.S Army Major General.

The flag he keeps in his law school office was in his Pentagon office when it was hit by a hijacked plane on Sept. 11, 2001. The flag was given to Huffman the day he retired from the Army.

“When I look at the United States flag, what goes through my mind are those values that have made our country so special throughout the years and those who have sacrificed to make it so,” he said. 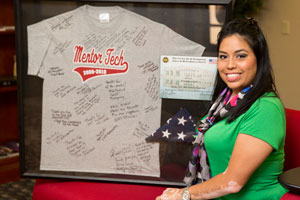 The Mentor Tech office displays an American flag presented to them from United States servicemen and women who were serving in Iraq.

Fabian Sanchez, a former Mentor Tech student, was in a reserve group serving in Iraq in December 2009. Mentor Tech participants sent care packages to the unit, and the soldiers responded by sending back a signed Mentor Tech T-shirt and the flag that flew over their joint forces command. 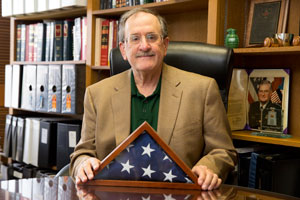 Richard Rosen, professor of law, has a flag that was given to him a couple of years ago after he spoke to a group of cadets and midshipmen who were attending various military academies.  The flag was flown over the U.S.S. Arizona Memorial at Pearl Harbor in 2012 on the anniversary of Sept. 11, 2001.

“The flag reminds me daily of the sacrifices made by the men and women of the armed forces who are willing to go in harm’s way to defend our freedom,” Rosen said. 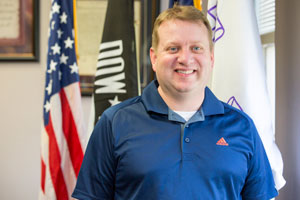 The Military & Veterans Programs (MVP) at Texas Tech has flags in its main office to welcome all students.

“Flag Day represents the greatness of our nation,” said Ryan Van Dusen, director of MVP. “The flag represents the hard work and sacrifice of all that came before us during both war and peace.” 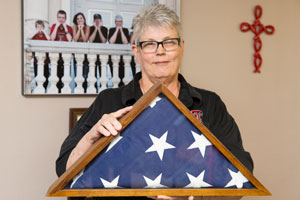 Patricia Gilliam, Recruiting and Outreach Specialist for the Military and Veterans Program, has a flag in her office that was presented to her family at her daughter’s funeral in 2008. Gilliam’s daughter, Allison R. Gilliam-Dagg, served in the Air Force for six years.

“The flag means that my daughter served her country with honor.  It also reminds me that I enjoy a freedom that most people in the world do not experience,” Gilliam said. “I swell with pride every time I see the Flag waving in the air.”

A Salute to Flag Day: The Story Behind the Flags at Memorial Circle