Texas Tech student was unable to participate in graduation after discovering an unknown illness. 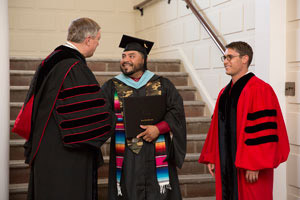 Sedeño received his diploma in a special ceremony with President Nellis and Board of Regents member John Steinmetz.

A military veteran and Lubbock native recently received a special graduation ceremony in the foyer outside the Texas Tech University President’s Office after he was unable to walk across the stage in May due to an unknown illness.

Former Army medic Jeremy Sedeño, 38, who served a year in Iraq, returned to Lubbock to earn a bachelor’s degree in history and a master’s degree in secondary education.

Just days away from graduating with a master’s degree, Sedeño was admitted into the hospital for the flu. He was determined to overcome his illness and walk across the stage.

“I told myself, ‘I’m going to make it. I’m going to get out of here and walk across the stage. I can do this,’” Sedeño said.

His plans quickly changed when doctors found nodules on both of his lungs.

Sedeño underwent an open lung biopsy four days before graduation, with doctors going through his back and ribs to remove a piece of the infected lung.

The recovery from the biopsy was too draining and painful for Sedeño that he was unable to attend graduation. 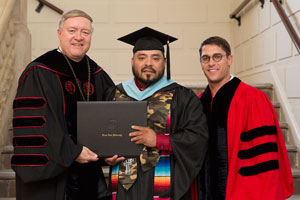 “I was bummed,” he said. “Everything I had worked for wasn’t going to be validated.”

Sedeño’s doctors sent his lung sample to the Mayo Clinic in Houston. The results came back as inconclusive.

“For them to come back with inconclusive results really stumped me,” he said. “If they can’t tell me what’s wrong, then what’s going on with me? It’s scary, but I try to hold to my faith and not worry about it.”

While he recovered from the biopsy, Sedeño’s father, a Lubbock County commissioner, worked to find a way for his son to have a graduation ceremony. Previously serving as an aide to former Texas Tech chancellor and Texas State Sen. John Montford, Sedeño’s father spoke with Montford’s wife Debbie, who serves on Texas Tech’s Board of Regents, to set up the special ceremony for his son.

“I thought we were just going up to the President’s Office to pick up my diploma,” Sedeño said. “I walked in, and they completely surprised me. My mom brought my cap and gown, and they had a ceremony for me with President Nellis, John Steinmetz (Texas Tech Board of Regents member), and my immediate family. 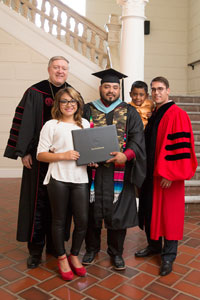 Sedeño shared his special day with his immediate family.

“It was really amazing. I was completely taken back by it.”

Nellis was honored to give Sedeño his diploma and applaud him for his achievements.

"We are so proud of all veterans, including those who choose to continue their education at Texas Tech University," Nellis said. "Jeremy is a testament of the sacrifice many individuals make in order to ensure our freedoms and it is our privilege to recognize him during this special ceremony. I am hopeful his example will shine a light on the opportunities that exist for our veterans to continue their educations."

Sedeño, who now has a master’s degree and a graduation ceremony to remember, he is proud of the hard work and effort he put into his education.

“I felt really good about that accomplishment,” he said. “All of my hard work had been solidified at that moment.”

Although the unknown illness is something he’ll have to face in the future, Sedeño doesn’t let it hold him back from a good quality life. He enjoys spending time with his three kids and looks forward to becoming a teacher and coach in the Lubbock area. His ultimate goal is to earn his doctorate degree and maybe teach at the college level.

“I would love to teach at Texas Tech. It’s my home,” Sedeño said. “The faculty is wonderful; the students are wonderful. It’s just one big family here.

“I thought I was just an old veteran who wasn’t going to be able to do anything once I got out (of the military), but anybody can do what I did here at Texas Tech.”

From West Texas to the Front Lines

Rawls College of Business Named One of Best Schools for Veterans