The challenge required middle schoolers to build and race boats made of cardboard and duct tape. 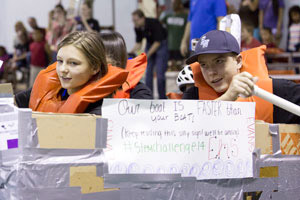 Seven LISD middle schools participated in a weeklong competition to design, construct, and race boats made only of cardboard and duct tape.

Once the splashing settled and the times were tallied, a group of boys from O.L. Slaton Middle School and their ship, the “U.S.S. Triangles,” emerged victorious with a time of 59 seconds Friday (June 13) during the third and final heat of the first TTU/LISD Middle School Challenge.

The crowd cheered wildly as 28 Lubbock Independent School District (LISD) middle schoolers launched their seven ships made of cardboard and duct tape into the clear blue waters of the Pete Ragus Aquatic Center pool in a bid for supremacy of the seas and a year’s possession of the silver Dwyer Cup in the school’s trophy case.

With help from their teachers and Texas Tech University graduate and mathematics undergraduates, students spent the week building boat models and completing challenges that focused on science, technology, engineering and mathematics (STEM) before culminating in the cardboard boat challenge.

“I was pretty nervous, but it was fun,” said A.J. Astorga, member of the O.L. Slaton team. “That was kind of scary because the water started poking through. There was water all in the boat. I tried getting it out. I tried leaning to this side, and then I fell out. We put these little boxes on the bottom of the boat to make them float up a little bit and we have the curve up in front to make it aerodynamic, so that probably helped a little bit. And we added layers on the side of the walls and the bottom.”

Alex Hernandez, another O.L. Slaton team member, said their secret to winning involved creating a ship that was wide in the center and structurally fortified with triangle shapes throughout.

But the pride of the “U.S.S. Triangles” was the intricate layering of boxes laid beneath her keel to help with added buoyancy.

“They’re boxes we code-named footballs,” Hernandez said, pointing to the team’s secret weapon beneath the ship’s false bottom.  “That’s what we called the boxes that we put under here.”

The “Tuffy,” a cardboard boat with utilitarian design made by Dalton Bishop, Johnny Hernandez, Odaly Hernandez and Brandon Rodriguez at Atkins Middle School, lasted longest during the “Last To Sink” challenge, and these students took home a monogrammed ship paddle for their school for the Mr. Wallace Award.

Jerry Dwyer, director for the STEM Center for Outreach, Research & Education (STEM-CORE) and a professor of mathematics, said the project is part of the center’s general STEM outreach with LISD and other middle schools.

“Early on last fall, we met with the LISD mathematics and science coordinators,” Dwyer said. “We stressed that we wanted Texas Tech to be a valuable resource to the community. We’re not just coming in here to test you or tell you what to do. We just want to see how we as mathematics and science educators can be of benefit in the community. We did a bit of brainstorming. So, one of the LISD people said it would be really nice to stimulate science interest at the middle school level. And another guy said we should do some kind of competition. And it went from there.” 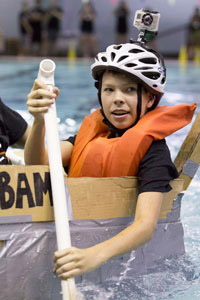 An Evans student captures the action with a GoPro camera.

From there, math and science faculty at Texas Tech and LISD began working to develop and refine the idea into a workable event. Science teachers from seven schools each recruited four students from their campus for the challenge. Texas Tech provided seven undergraduate students from the TTU Noyce Scholars Program who are going into the teaching profession, as well as a Texas Tech graduate student Kristin Yearkey and several faculty members for backup educational support.

“The enthusiasm is what I like to see in all these kids around here,” Dwyer said. “They’re all excited about it. They’ve spent the week doing mathematics without knowing it. They’ve been doing angles and projections and science, trying to learn how to float and streamline. It made this lovely combination. We had the district promoting it. We had teachers recruiting the students. We had pre-teaching expertise. We had some science expertise and, all together, it just seemed to gel. Everybody’s been excited about it. I think the key thing here is the way that LISD bought into the idea.”

Chelsea Brown, a senior mathematics major from Big Sandy, Montana, worked with the four-student team from Irons Middle School. Though her students struggled with some of the challenges in the beginning, they earned top scores by the end of the week.

“We were really confident, but I think we just had a little problem with our stability, and we got kind of excited and didn’t take our time pushing it into the water,” Brown said, explaining the difficulty the crew of Irons Cougars’ ship had during their heat. “Right as we pushed off, we tipped and sunk. So it was a little bit of a defeat. But, we learned a lot and it was awesome. The kids were great, they stayed positive.

“I think programs like this are a fantastic start to getting kids interested in STEM disciplines. Obviously you’re not going to realistically be using cardboard boats with duct tape, but it’s awesome to have their imaginations open up and think what will work, what they need to think about as far as stability and having air pockets and layers, how they’re going to float and what size of a boat they’ll need to float. I had one student on the first day bring a piece of paper with all formulas on it for buoyancy and density of water. They were very creative. They were good kids, and they really enjoyed it.”

Levi Johnson, senior project administrator for the Texas Tech  STEM-CORE program, said his team worked with Mike Sizemore and Amador Vasquez, the math and science coordinators for LISD, to pull the summer program together. 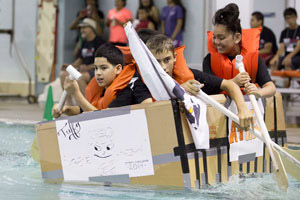 The boat from Atkins Middle School was the last to sink.

Texas Tech and LISD educators wanted to find a way to engage middle school students in math and science in a way that would get younger students excited, he said.

“It started with one of our National Science Foundation grants –  the GK-12 Building Bridges Program,” Johnson said. “They had grad students working with students from some of the Lubbock area high schools, and they actually attempted this cardboard boat idea. In their race, only one of the boats made it to the middle of the pool to turn around. So the idea was to get the students out of their comfort zone with some hands-on learning, and I think it turned out great.

“Honestly, when I first heard somebody say they thought putting kids in cardboard boats on Friday the 13th was a good idea, I was just hoping the boats would float. I had no idea what to expect, so this has been a lot of fun.”

Mike Sizemore, LISD science coordinator, said he’d always wanted to try a “Junkyard Wars”-style challenge with students by giving them a pile of garbage to dig through and find things to make a boat out of that they wouldn’t otherwise think to use. The cardboard and duct tape challenge worked just as well, he said.

More importantly, Atkins, Evans, Irons, Mackenzie, O.L. Slaton and Smylie Wilson feed into both Monterey and Coronado High Schools, which are STEM schools, he said.  The seventh school participating was Talkington School for Young Women Leaders, which serves grades 6-12.He hopes that the challenge will pique their interest to pursue further education and careers in math and science.

Images below provided courtesy of Lubbock ISD.
Click to enlarge.

No time
Completed half the course.

No time
Did not successfully launch.