With his 5-year-old son in tow, Alvino Lopez eventually graduated to provide a better life for his family.

With his 5-year-old son in tow, Alvino Lopez eventually graduated to provide a better life for his family. 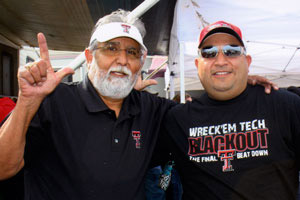 Alvino Lopez and his son Chris.

In Holden Hall, Alvino Lopez scribbled his notes down quickly while the professor presented his lecture during history class. Sitting beside him on the floor was a “student” of a much smaller stature, his 5-year-old son, Chris, who sat quietly doodling in his coloring book.

In 1975, Alvino’s wife, Connie, encouraged him to go back to school to earn a college degree. He was 28 years old.

Coming from a family with 10 siblings, Alvino became the first child in his family to earn his high school diploma and college degree. He said it opened up many doors for him that otherwise would have remained closed.

Chris, now 44 years old, recalls his father’s education as life-changing. He never would have thought sitting on the floor of a lecture hall would’ve had as big of an impact on him as it did.

“The university means so much to me, because it’s been such a big part of my life,” Chris recalls. “With (my dad) being the first in his family to graduate with a college degree, it really opened up my eyes to what a college education could do for a family.

“We were able to experience so much more because my dad was a graduate from Texas Tech.”

Where it all began

Born and raised in Lubbock, Alvino never even thought about attending Texas Tech to further his education. Shortly after walking across the stage to receive his high school diploma from Lubbock High in 1965, Alvino enlisted in the U.S. Navy and was sent to boot camp two weeks later. 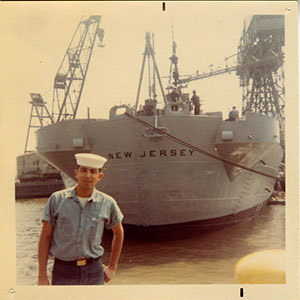 Alvino enlisted in the Navy after high school.

“People kept telling me, ‘You know they’re going to send you to Vietnam, right?’ I had no idea what they were talking about,” Alvino said. “I just knew I wanted to be a part of the Navy.”

After he was stationed in Key West, Florida, Alvino served on the U.S.S. New Jersey and began serving in the Vietnam War in 1968. When he returned to the U.S. in 1969, he and his family moved to Dallas where he took a job pouring concrete.

His plans quickly changed after his wife provoked a life-changing thought.

“One night my wife and I were at a party, and I asked my wife whose party it was,” he said. “Connie pointed to the man hosting the party and said, ‘How old do you think that man is?’ Well I thought he was 70 years old, but turns out he was 50 years old. She continued to tell me, ‘If you keep pouring concrete, that’s what you’re going to look like.’ I though there was no way I was going to keep doing this.”

In 1975, Alvino enrolled at Texas Tech and began working on his sociology degree.

“(My mom) saw something special in my dad that he couldn’t,” Chris said. “She knew he was meant for something better.”

After working all day, Alvino came home, threw Chris upon his shoulders, and began walking to campus for his evening class. While Alvino went to school, Connie worked her second job to help support their family, so Chris went with his father to class.

A couple cleaning ladies offered to watch Chris while Alvino was in class, and he would sometimes watch “Captain Kangaroo” on an old, 1970s console TV in the Student Union Building.  Most of the time, though, Chris sat quietly on the floor by his father, keeping to himself.

“I didn’t really have a concept of school yet, because I hadn’t even started kindergarten,” Chris said. “I guess I knew enough not to be disruptive, because there were no other kids around that were my age.” 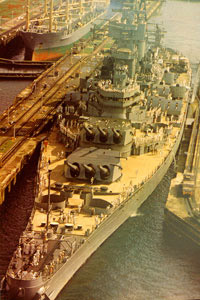 Throughout Alvino’s college career, Chris was right by his side.

“Texas Tech has been a part of my whole life,” Chris said. “I remember going with him to the library, going up in the stacks to find books, hanging out in the student center, taking swim lessons at the Aquatic Center, going to football games, and him taking me to events on campus such as the pumpkin carving contest by the old dairy barn.

“It was interesting to see what college was like at such a young age even before my actual education had even begun.”

Alvino graduated from Texas Tech with his Bachelor’s degree in 1980 when he was 33. Looking back, he credits his wife for helping him succeed.

“She was a thousand percent behind me,” he said.

From Here, It Became Possible

After earning his degree, Alvino began working as a migrant Head Start director in Ralls. Working at his first desk job, he was promoted to a regional director position that oversaw 10 other migrant Head Start offices. Alvino later went on to work at Texas Tech for 10 years at The Institute for Child and Family Studies in the College of Human Sciences, and then for the state for another 16 years. When he retired, spending time with his family became his number one priority.

“When it came to my family, that was one of my biggest joys,” said Alvino, now 67.

On Jan. 14, 2011, Alvino’s life completely changed when his wife died due to complications during surgery.

“How do you even begin to call your kids and tell them that kind of news? I was devastated,” he said.

Married for 44 years, Alvino had known Connie ever since he was 16.

“I remember the first time I saw her. She was riding her bike in front of the Catholic church,” he said. “I walked up to her and told her I was going to marry her someday. We got married in 1967 while I was in the Navy and had been together ever since.”

Alvino said he misses his wife terribly, but now spends the majority of his time with their son, daughter, and five grandkids. He enjoys their yearly family trips most.

It’s been 34 years since Alvino graduated from Texas Tech. By taking a leap of faith with his education, he made a better life for himself, his family and future family generations to come.

Chris, who decided to follow in his father’s footsteps, attended Texas Tech and now works for NetApp, an international software company in Austin. After his father earned his degree, their family began representing the scarlet and black.

"When I graduated from Texas Tech, it was a dream that came to fruition."
Alvino Lopez

“Our whole family consists of Red Raider fans. My son is just itching to become a Red Raider,” Chris said.

Looking for future Red Raider legacies to come out of the Lopez family, Alvino thanks his wife for pushing him to achieve this goal.

“She was the biggest part of my life,” he said. “Everything I ever did was because she was there, and she was always encouraging me.

“I never would have thought of going to college when I was younger, but when I graduated from Texas Tech, it was a dream that came to fruition. I was so proud to graduate from Texas Tech. I’m a huge, huge fan.”