The donation from the Texas Tech alumnus will fund an estimated 30 doctoral fellows per year. 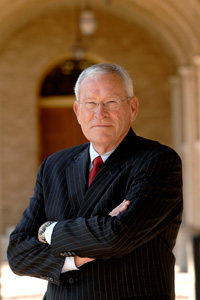 Texas Tech University announced June 10 a gift of $15 million for graduate student fellowships from alumnus Edward E. Whitacre Jr. and his wife, Linda. Whitacre is former chairman of the board and CEO of General Motors and chairman emeritus of AT&T.

The couple’s gift will establish the Ed and Linda Whitacre Graduate Fellowship Endowment and fund an estimated 30 doctoral fellows per year. The donation is eligible for state matching funds through the Texas Research Incentive Program (TRIP), which is expected to double the gift’s total impact on the university.

“Ed has been a friend of mine since we attended Texas Tech together,” said Chancellor Kent Hance. “As chairman and CEO of two of the top companies in the world, Ed is one of our most notable alumni and has been a great supporter of Texas Tech over the years. This gift will greatly impact graduate student enrollment and research. We are so thankful for Ed and Linda’s generosity.”

By supporting faculty research and conducting research of their own, graduate students make vital contributions to the research mission of Texas Tech University, which in turn drives economic and business development for Texas and the global economy. Doctoral fellowships from the Ed and Linda Whitacre Graduate Fellowship Endowment will rival stipends offered by other nationally-competitive awards, increasing the university’s ability to recruit top students and supporting Texas Tech University’s goal of becoming a national research university.

“Texas Tech has always had a special place in my heart,” Whitacre said. “Over the years, I’ve watched this great university grow and make tremendous strides. Linda and I are truly glad to give back to the university that gave so much to us, and want to give a special thanks to Kent Hance for the great job he has done as chancellor. We hope this gift will continue to move Texas Tech forward among the nation’s best universities.”

A native of Ennis, Texas, Whitacre received his bachelor’s degree in industrial engineering from Texas Tech University. In 2008, Texas Tech recognized $25 million in contributions from AT&T and friends of Whitacre by naming the Edward E. Whitacre Jr. College of Engineering in his honor.

"Through this wonderful gift to our graduate fellowships, Ed and Linda Whitacre are ensuring opportunities for numbers of graduate students and supporting the global mission of Texas Tech University," said President M. Duane Nellis. "We have emerged as a national research leader, and continuing on this path demands a strong graduate presence. The impact Texas Tech has in educating its students is a contribution to our future."

A longtime supporter of his alma mater, Whitacre and his wife, Linda, have established and contributed to several endowed scholarships and professorships in the Whitacre College of Engineering and other colleges across the university. He also was instrumental in securing numerous significant gifts supporting undergraduate scholarships, graduate fellowships and faculty positions at Texas Tech University.

“This gift will help transform graduate education at Texas Tech by enabling us to recruit top students from around the world into our graduate programs,” said Mark Sheridan, vice provost for graduate affairs and dean of the Graduate School.

One of the university’s most distinguished alumni, Whitacre was appointed to the Texas Tech University System Board of Regents in 1993 and served as chairman from 1995-1998. He was named a Distinguished Engineer by the Whitacre College of Engineering in 1985 and received the Outstanding Executive award from the Rawls College of Business in 1996.