Students are tasked with developing and designing habitations as a part of the camp. 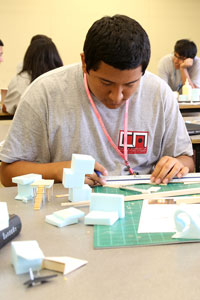 Anaelisse Elias was interested in architecture in high school. But her collegiate plan had already been set in motion after graduation from Houston Langham Creek High School.

“My plan was to go to community college for a year and get all my core classes out of the way and then transfer,” Elias said. “I kind of knew that I wanted to do architecture but I wasn’t completely sure.”

In between graduation and her freshman year of college, Elias went through the two-week Curtis W. Clerkley Jr. Architecture Academy offered by the Texas Tech University College of Architecture. That cemented her desire to make that her major.

Now, Elias, a graduate student in Architecture and Business Administration at Texas Tech, is helping high school students who were once in her shoes hopefully realize their dream of going to college, and in the process, expose them to the world of architecture through the same process, serving as a student assistant for this year’s academy.

“I think it’s really good,” Elias said. “Not only do they learn a lot but also it might help them realize that maybe they do want to give it a try.”

Several students from inner city high schools in Dallas recently completed the two-week course through the Clerkley Architecture Academy. Michael Martin, architect and director of external programs at Texas Tech who is in charge of the academy, said the overall goal of the academy is to expose students to possibilities for education beyond high school.

“The primary goal is to get these kids believing in themselves and believing that they can get a college education,” said Martin, who in his first year as director. “I think that the interest in architecture gives them the opportunity to use that for a chance to go to college.”

Founded in 2007, the Clerkley Architecture Academy was the result of an endowment established by Texas Tech alum Curtis Clerkley Jr., the principal of The Clerkley Watkins Group in Houston. The endowment and the support of various sponsors allows for assistance with scholarships to help pay for the two-week program, which costs $1,600. 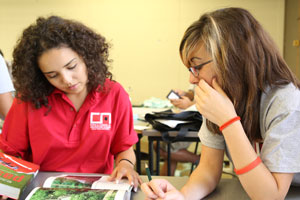 The only expense to come from the student is the $100 fee to attend the academy.

The first week of the program involves students touring various architectural firms and meeting professional architects in their city. This year, 11 of the 12 students chosen for the academy come from the Dallas-Fort Worth Metroplex (one other from Lubbock), and functions were based at the Dallas Center for Architecture. The academy is assisted by the American Institute of Architecture-Dallas, Latinos in Architecture Committee.

Martin credited a pair of teachers at Dallas Molina High School, which holds the Molina Design Academy, with helping process applications from several students at that school to get into the academy. Other students came from Dallas Skyline High School, Bedford High School and Lubbock.

For the second week of the academy, the students are flown to Lubbock where they stay in on-campus housing and work on various projects in the Architecture Building studio. The students are paired up, asked to pick a geographic location such as beach or the mountains, develop a storyboard for their project and design a small habitation for that space.

“The first week everybody became close and good friends,” said academy participant Asad Muhammad, who recently graduated from Skyline. “There are so many requirements you have to follow that you really have to think outside the box to make your’s unique. You have to ask others questions and so it makes people closer with each other.” 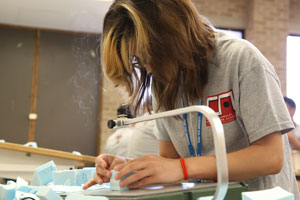 Students are trained to use a hot wire foam cutting machine that allows students to take Styrofoam and cut it into different shapes. They are also exposed to laser cutting devices but do not actually use the more sophisticated machines that are used by second-year architecture students.

At the end of the second week, the students returned to Dallas to make a presentation in front of family, friends and sponsors.

“You’re going to have to take ideas and criticism,” Muhammad said. “And that changes your perspective. They’ve taken us to places throughout Dallas and Lubbock, and it helps you put new ideas into your designs that you do.”

The Clerkley Academy has targeted only one city each summer, usually rotating between Dallas, Houston and San Antonio. Martin, however, would like to see it grow to maybe include two cities each summer.

While Martin said he would like for the academy to increase exposure to architecture for these students, the main goal is to have them further their education.

It worked for Elias, and she’s hoping others find the academy as crucial to their future as it has been for her.

“It’s as much fun to do as a student as it is to do as an instructor,” Elias said.