From graduation to more baseball victories to a Big 12 track title, Red Raiders had plenty to celebrate. 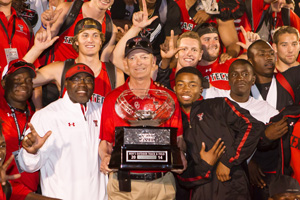 For the second time in program history and first time since 2005, the Texas Tech men’s track and field won the Big 12 Conference Championship at the Terry and Linda Fuller Track and Field Complex.

The weekend also included five commencement ceremonies at the United Spirit Arena, in which thousands of Red Raiders graduated. Down the street, at Dan Law Field at Rip Griffin Park, the Texas Tech baseball team capped a stellar regular season with a three-game sweep over West Virginia.

But it was the men’s track team that saved the best for last, scoring a program-best 160.5 points over the three-day meet to capture the Big 12 Conference title. The women’s track team finished third for its best finish since 2009.

“On behalf of the entire Red Raider nation, I congratulate head track coach Wes Kittley, his staff and all the student-athletes for their championship performance,” President M. Duane Nellis said. “Congratulations are also in order for head baseball coach Tim Tadlock and his group for a great regular season in which they reached 40 victories. And, of course, we applaud all our graduates for their hard work and dedication.”

“It was a memorable weekend for so many Red Raiders.”

For more on the baseball team’s victories, click here.

For more on the men’s track team’s championship, click here.