Courtney Burkholder looks forward to seeking out new authors and helping them get published. 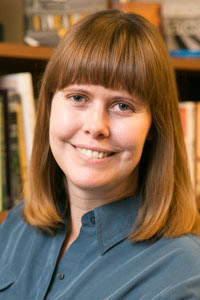 Immersed in the publishing business for 20 years, Courtney Burkholder is now taking the lead as the new director for Texas Tech University Press (TTUP). The new director is no newcomer to Raiderland though, as she worked for the publishing office in 2004 to 2006 as a sales and marketing manager.

“I’m excited to be back at Texas Tech, and I’m looking forward to all the books we have coming out in the near future,” Burkholder said.

Throughout her publishing career, she has worked in Nebraska, Oregon and Texas for university presses and also a publishing company for K-12 books. After receiving her anthropology degree from the University of Nebraska, Burkholder quickly broke into the publishing business for the university’s press due to their strong publishing of anthropology books.

“It was an entry-level job, so I applied and got the job,” Burkholder said. “I’ve been in the publishing business ever since and have loved every minute of it."

Now here at Texas Tech, she looks forward to the variety of books that will be published this year. While many of the books fall under Vietnam archives, costume studies, natural sciences, and Jewish studies and literature, Burkholder plans to expand TTUP’s publishing categories. New categories include Texas Tech’s strong suit, wind and water studies, and also regional music.

As the new director, she also looks forward to seeking out new authors and manuscripts, helping scholarly works get published, raise the awareness of TTUP, and provide high-quality and interesting works through the publishing office.

“Texas Tech is so very fortunate to have Courtney Burkholder join our team,” Miller said. “Professionally, Courtney comes to Texas Tech with significant experience in new media for scholarly presses, in marketing and in international sales development.”

“In addition, she has earned a national reputation for insight, creativity and excellence in the work she has done in the publishing field. Personally, she has also brought amazing energy and enthusiasm.”