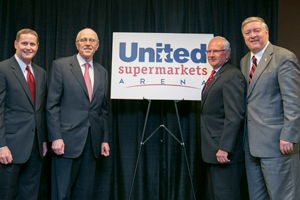 Texas Tech University officials announced today (May 2) they received $9.45 million from United Supermarkets to renew the Texas-based grocery chain’s naming rights on the United Spirit Arena and begin renovations to the venue.

Funds from the 10-year extension will begin extensive renovations on facilities for Texas Tech volleyball and men’s and women’s basketball teams. The arena will be renamed United Supermarkets Arena, subject to approval by the Texas Tech University System Board of Regents at its upcoming meeting, May 15-16, 2014.

“As an industry leader and great corporate citizen, we are truly thankful to United Supermarkets for their continued support of Texas Tech and are proud to bear their name on such an important facility,” said Chancellor Kent Hance. “The generosity of United Supermarkets will provide state-of-the-art amenities for our student athletes and help us continue to educate, serve and grow fearless champions.”

United Supermarkets secured the original naming rights on the facility in 1996 with a $10 million, 20-year agreement supporting the construction of the multi-use, 15,000-seat arena. Since opening its doors, the arena has become the premier entertainment and athletic venue of the Lubbock community and surrounding South Plains region, hosting a multitude of concerts by internationally recognized performers such as Elton John, George Strait and Aerosmith.

“We are extremely pleased to be able to renew our arena agreement with Texas Tech,” said Robert Taylor, president of The United Family™. “We believe this facility is among the finest venues in the country and enhances not only the student experience at Texas Tech, but the quality of life for West Texans as well. We’re grateful for our long partnership with Texas Tech and look forward to more new and exciting things in the years to come. We are especially thankful for the incredible support of our guests, who make moments like this possible.”

"United Supermarkets and Texas Tech have enjoyed a lengthy relationship and we are proud to continue that today," said M. Duane Nellis, president of Texas Tech. "Like Texas Tech, United has been a steward of the community for many years, conducting outreach and supporting local and regional endeavors. Their commitment to Texas Tech and this area is a testament to the leadership of the United team." 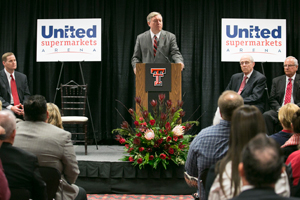 Renovations to the arena are a top priority for the athletic department’s current fundraising effort, The Campaign for Fearless Champions, which has goals of enhancing athletic facilities, investing in scholarship endowments and growing the Fearless Champions Leadership Academy through donations and planned gifts.

State-of-the-art improvements will be made to locker rooms, film rooms and training facilities that have not been upgraded in the 15 years since the building’s construction. Additional funds will support other arena projects and priorities of The Campaign for Fearless Champions.

“The support from United Supermarkets brings great momentum to our campaign efforts,” said Kirby Hocutt, director of Texas Tech Athletics. “Today’s announcement will ensure that our arena remains an unparalleled venue in the Big 12 Conference and nation. Thank you to United Supermarkets for investing in our vision and student athletes.”