Olympian-turned-cowboy stuntman’s memoir is awarded as a Book You Should Know About. 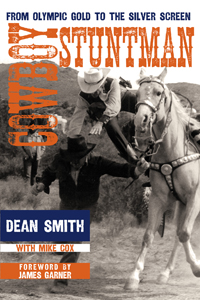 “Cowboy Stuntman: From Olympic Gold to the Silver Screen,” by Dean Smith with Mike Cox, is among 11 titles published by university presses worldwide to receive this honor.

The Best of the Best books will be presented by a panel of public and secondary school librarians during a program at the American Library Association’s annual meeting in June. Librarians reviewed and evaluated approximately 350 titles published by members of the Association of American University Presses to create the list.

“Cowboy Stuntman” is the memoir of Smith, who won an Olympic gold medal in track and field and later became a film stuntman, doubling actors such as Michael Landon, Steve Martin, Maureen O’Hara, Robert Redford and Roy Rogers.

The Olympian-turned-cowboy stuntman was born in Breckenridge, Texas and attended Graham High School. He won the state championship for 100-yard dash in high school and went to the University of Texas, where he played football and was All-American in track. After playing for the Los Angeles Rams in the NFL for a short time, a friend introduced him to James Garner, who helped him land his first stunt job. Smith appeared in more than 140 movies during his stunting career.

Now at the age of 82, Smith has earned several titles such as Olympian, football player, stuntman, cancer survivor, family man and now author. He resides on his Texas ranch with his wife, Debby, and son, Finis.