The legendary author once spoke to the Texas Tech community during Black History Month. 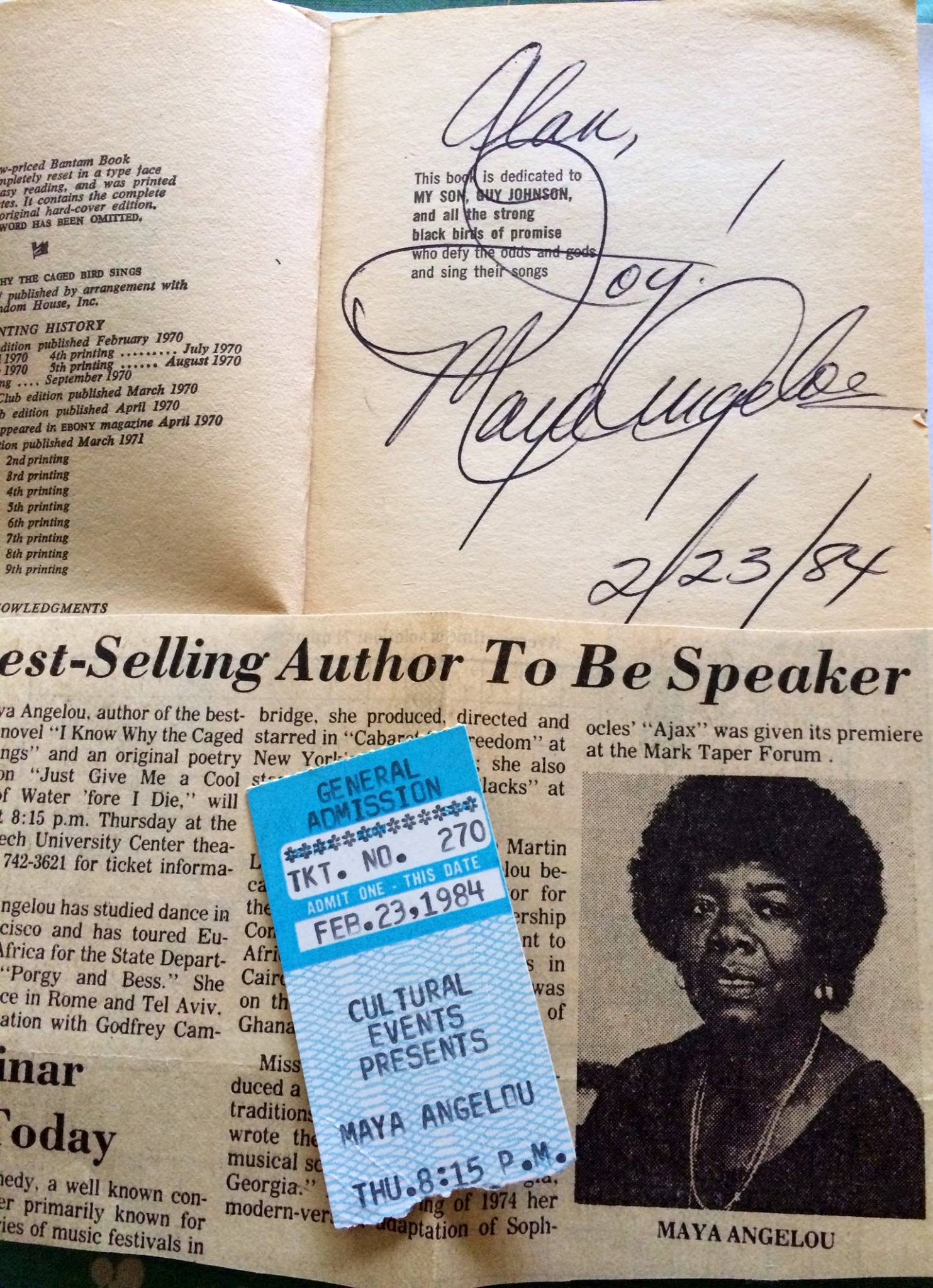 Angelou, an author, poet, film director and Renaissance woman, died Wednesday at the age of 86. A caregiver found the writer dead in her home in Winston-Salem, North Carolina.

Angelou, a high-school dropout, lived her passions in life. She acted, directed, wrote plays, sang and danced. She served as the first female and first black street car conductor in San Francisco, and even worked as a madam in a brothel. Her first memoir, "I Know Why The Caged Bird Sings," still is widely taught in schools.

"Reading 'I Know Why the Caged Bird Sings' had a profound impact on me," Hendrix said. "So, even years after I graduated, I had to come see her at Allen Theatre."

Angelou visited Texas Tech Feb. 23, 1984 and Hendrix remembers the event like it was yesterday. He said Angelou came out in a "gorgeous gown" tiered in various shades of pink to purple. She immediately began reading poetry and later stayed after her presentation to greet audience members.

Hendrix said he brought his well-worn copy of "I Know Why the Caged Bird Sings" to the event, a book he first purchased for Ann Daghistany Ransdell's Women in Literature course while a Texas Tech student in the 1970s.

"When I handed it to (Angelou) to autograph she turned it, looking at the cracked spine and worn cover, and said, 'That's the way I like them to look,'" Hendrix said.

In memoriam of her death, Texas Tech faculty and students speak out on Angelou's impact on themselves and on the world.

Miller was serving as president of South Dakota State when Angelou visited the campus 10 years ago.

"When we invited Maya Angelou to visit our campus in South Dakota, I was not certain how well known she might be to the students. To my great delight, at five o'clock when I left the building where she was to perform, there was already a line forming outside the building for the seven-thirty event. The auditorium was standing room only, and as I was on the stage behind her, I could watch the students' faces. They were saying the most famous poems along with her.

"She connected with them in an amazing way, and her message of our human connections was an important one for them."

"If you took any of the different aspects of Angelou's career — dancing with Alvin Ailey, her close participation with important civil rights activists, or her award-winning writing — and held each up alone, she would be an important figure. The fact that she bridged so many different aspects of American artistic and political life makes her legendary. And to think that all of this came from modest origins, as an African American girl from rural Arkansas, in a period when both black Americans and women were routinely disenfranchised amid the cultures of systemic racism and sexism in America, makes it all the more astounding. The triumphs of her life went a long way toward redressing some of the problems of those systemic inequalities."

"The work that first influenced me was "On the Pulse of Morning," the poem she wrote for President Clinton's 1993 inauguration. I remember watching her reading the poem live at the ceremony when I was an undergraduate English major, and I was immediately captivated by the forcefulness of her language, its hopeful message and her commanding performance as a speaker. When Clinton himself jumped up in excitement at the close of the poem, I shared his enthusiasm.

"In hearing the news of Angelou's passing this morning, I found myself mourning not just her life, but also past generations of writers who were famous merely for writing books. If anything, I would hope that all of the news that her death generates today compels many readers to seek out her work itself."

"I remember reading "I Know Why the Caged Bird Sings" years ago when I was an undergraduate at the University of Wyoming and it had a major impact on my own view of the world and the place of women in it. I was deeply moved by the strength she showed regaining her voice after a childhood of suffering growing up in the Jim Crow south.

"Even though my own experiences were miles away from hers, both literally and figuratively, I learned from her own story of strength. You hear the expression sometimes that we are all dwarfs 'standing on the shoulders of giants.' Maya Angelou is one of those giants who paved the way for women to find their voices."

"By living her own life to the fullest, and sharing that life in writing, stage and film, Maya Angelou affirms what writing and art always affirm, which is the vital importance of every person's life.

"From profound, tragic isolation as a child, she went on to lead a prominent, public life, a celebrity. Her art was crucial to this movement.

"The first poet since Robert Frost to read a poem at a presidential inauguration, Angelou demonstrated the continuing importance of poetry as a bridge between the private and public worlds we inhabit."

"Maya Angelou influenced many people with her strength of spirit. And her message was one of hope and overcoming adversity and pain. Angelou was a high school dropout, who was raped at age seven, and yet she became a prominent university professor and wrote one of the most famous books in the history of American popular culture.

"Her legacy would be that anyone can rise above their difficult past and painful memories to achieve whatever it is you want to become. It is a timeless message, increasingly relevant in society today."

"She has been a voice for so many who fought insurmountable odds to overcome and gain a sense of empowerment.

"She lived, in peace; not because she did not confront injustice, challenge the majority, refuse conformity, suffer pain or shed light on dark truths, but because she did. She is no doubt resting in sweet, unrelenting peace.

"I hope, as her infamous words of wisdom are shared today, as an act of paying respect and love, to her life, works and teachings, we are all reminded of the great truth she was placed on this earth to deliver. I hope it resonates. We are a better world to have experienced her."

"Angelou touched me in many ways as a young African American woman living in southern Arkansas. I grew up in a town about 50 minutes east of Stamps, Arkansas where members of the KKK would openly protest political issues on the highway. And like Angelou, I had to learn quickly what it meant to be a black woman in the south, even in the 90s.

"She remains iconic because her work dares to question established beliefs and conventions to show the world that multiculturalism is a beautiful and elegant thing. Her poetry captures the essence of humanity, brings it to the fore and allows the reader to experience firsthand the issues the poem brings to life.

"I remember reading 'Phenomenal Woman' as a young teenager and feeling proud to be a black woman when people who did not look like me appeared on billboards or make-up commercials and were labeled as beautiful or elegant. 'Still I Rise' is an all time favorite for me. There's so much cultural richness in each line that captivates me each time I read it. She's able to take lemons and make lemonade out of every situation that appears in this poem. I love the uplifting, optimistic tone in this poem. I read it when I feel I need more inspiration in my day."

"Angelou leaves us a great legacy about pain and joy that we must continue to explore as a people. Her voice was not muted by death.