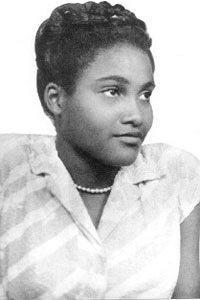 “The number of those who will not object [to integration] is likely to be far greater than one might think,” Avalanche-Journal columnist Chas. A. Guy stated at the time. “Most people—including some of those who are the hottest against all forms of integration—realize that it already has come in many places, including much of Texas, and that before long, it will be universal. In short, butting one’s head against a brick wall in this, as well as in other incidences, is never an inviting activity.”

Ophelia wanted to be a nurse all her life. Maurice recalled one day during his childhood when his sister came back to the family home in Littlefield from Texas Tech in her white nurse’s uniform.

“I am a nurse and they cannot take that away from me,” she said. “I’m going to show it everywhere I go. I am a nurse.” 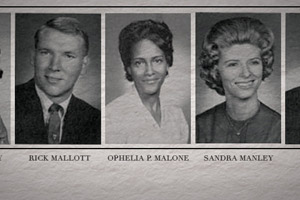 Ophelia as pictured in the 1964 La Ventana

More than 2,100 students have been served through the program. In the last eight years, nearly 800 Mentor Tech participants have graduated from Texas Tech and the Texas Tech University Health Sciences Center. The program’s participating student average retention rate (86 percent) is higher than the university’s overall rate, and the program has awarded close to $100,000 in scholarships since its inception.

“To have a program like this, certainly, is not just a step but a leap forward in progress, ensuring that students not only get in but that they get in and graduate with a sense of purpose and service not only to their community and to their nation,” Darrell said. “Ultimately, that is the direction of the program and it’s what my parents and aunt did with their lives.”

Darrell said his parents, William and Doris, believed in education: William ultimately served as dean of students at Jarvis Christian College in Hawkins after a long career in science education, and Doris served as a school counselor for Houston, Lubbock, Nacogdoches and Levelland school districts. Doris followed Ophelia as one of the first African-American graduates from Texas Tech when she received a master’s degree in education. She passed away in 2010.

“My mother took the tools that she learned at Texas Tech and used that to go into the homes of students and help counsel them and steer them on a path to excellence by encouraging them to remain in school and stay focused on education,” Darrell said. “She would not have had that opportunity if it weren’t for Texas Tech and for the opportunity that Ophelia helped create. I am profoundly grateful.” 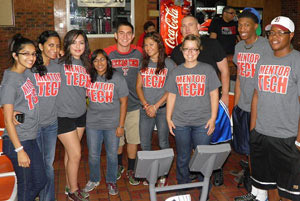 “We have pride for each and every one of our graduates,” Nellis said. “Ophelia Powell-Malone, through her efforts and successes both as a student and in her career, serves as a shining example that from here, it’s possible.”

“Mentors can play a significant role in students’ success or failure because often they are driven by sheer willpower as well as their intellectual capabilities. Sometimes students fall by the wayside simply because personal issues begin to interfere with their academic life. The fact that Mentor Tech is there and able to help students navigate issues, remain calm and understand they aren’t facing issues alone is an indication that the university has made great strides in providing assistance to students of color and to all students.”

For Cory, who has grown close to Ophelia’s family throughout the years, remembering her not only helps to recognize Texas Tech’s past, but also gives students today an example for how to go forward in their lives.

“I feel very blessed to have known people who could tell me what things were like for African-Americans before my time at Texas Tech, to have my own experiences, and to be able to contribute to the students today and for future generations by making things better for them,” Cory said. “I am hopeful that students today can learn and lead by Ophelia’s example.”