A Texas Tech University student recently co-authored a novel with his mother. 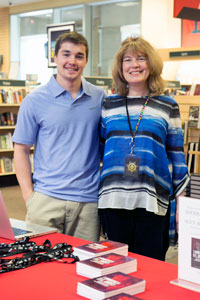 Brankner and his mother,
Sherri Hubby

Alex Brankner said he always had a passion for telling stories—a passion that must run in his family.

Brankner, a junior biochemistry major from Austin, recently published his first novel, and his co-author happens to be Sherri Hubby, his mother.

“About two years ago, my mom asked me to look over a few chapters of her book,” Brankner said. “I have a talent in being able to develop a good storyline and make characters come to life, so naturally I began helping.”

Their fictional novel, “Tainted Blood,” follows a Food and Drug Administration (FDA) investigator as she uncovers the wrong doings in a blood bank.

Hubby, who worked for the FDA for nine years, said she thought the public might be interested to see what exactly takes place during these inspections. She said she wasn’t surprised when her son offered suggestions.

“He has always had a wonderful vocabulary and a very creative streak in him,” Hubby said. “So what we would do is I would write something, and then Alex would actually come in and make it really conversational and think about character development.”

Hubby said the book was a true collaboration and that Brankner taught her as much as she taught him. 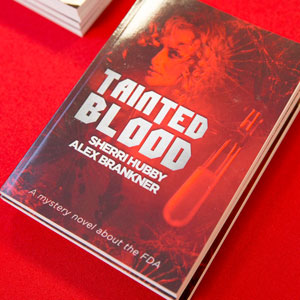 Writing is not the only interest Brankner shares with his mother.  He also hopes to one day work for the FDA.

“I find my mom’s past career with the FDA as a field investigator fascinating,” he said. “I like hearing her stories about how affidavits are administered and could be used in a court of law.”

The pair currently is working on a sequel to “Tainted Blood” and another book featuring mother-in-law stories.

“Texas Tech has a great reputation for developing individuals and preparing them for a great future,” Brankner said. “I have been able to develop the knowledge, skill set, and ability which have already helped me be successful.”

Brankner and his mom recently had a book signing at Barnes & Noble in the SUB. “Tainted Blood” is available for purchase at any Barnes & Noble or on Amazon.

Engineering Balance: A Day in the Life of Michelle Pantoya

The Magic Behind Housework on Television