Ivanka Boling, a single mother of two from Bulgaria, will graduate with a 4.0 GPA. 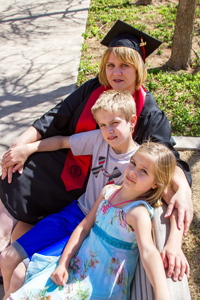 Ivanka Boling with her children Tyler, 11, and Emma, 7.

Ivanka Boling will graduate from the College of Human Sciences on Saturday with a 4.0 GPA. However, her journey to academic success at Texas Tech had more distractions than many of her classmates.

Boling is a single mother of two and a non-traditional student. She immigrated from Bulgaria to the United States in 2000 and moved to Lubbock with her family in 2007. In 2010, the same year she became an American citizen, she said she felt compelled to return to school to earn her bachelor’s degree.

Although Boling attended a university in Bulgaria, most of her coursework did not transfer and she had to begin from scratch as an family and consumer science education (FCSE) major in the College of Human Sciences.

Despite caring for two children by herself and working part-time for a law firm, Boling graduated in four years and is just one of eight students in Human Sciences and the only one in her program with a 4.0.

“Ivanka is a remarkable young lady who aspired to be a family and consumer science teacher early on in her college program,” Allison said. “Faced with many challenges as a single mother, she has successfully balanced family life with academic work and employment responsibilities to enable her to be a devoted mom and at the same time, an exemplary student.”

Even though Boling said she has no regrets, her experience hasn’t been easy.

“Deciding to go back to school was a huge decision for me, because of where I was in my life four years ago,” Boling said. “My children had to learn how to be independent, and I had to balance everything with what time I had in my day.”

She said Tyler, 11, and Emma, 7, helped their mother by independently taking care of their own homework and with housework and while Boling completed schoolwork.

In contrast to her professors in Bulgaria, Boling said she initially was overwhelmed by the help and support Texas Tech professors and academic advising staff provided.

“Loved every one of my professors,” Boling said. “They were all very helpful. During one semester when my kids were sick often, my professors were so understanding about missing class and making up assignments. I even brought my children to a test once!”

"Deciding to go back to school was a huge decision for me, because of where I was in my life four years ago."
— Ivanka Boling

She said online coursework helped open her schedule a bit.

“I took at least one class per semester online,” Boling said. “I was able to work. If not for the online classes, I couldn’t have made it, financially.”

Prior to beginning at Texas Tech, Boling ran a small business where she created prom and formal wear. People often asked her how to sew, which prompted her interest in family and consumer sciences (FCS).

As a single mother juggling schoolwork and a job, she said the skills she will teach are reflective of the many tasks she does every day.

“Financial planning, sewing, nutrition: these are very important skills for life,” Boling said. “In our schools today, academics are highly emphasized but students don’t necessarily know how to balance everything. Life skills are so important for them to learn so that they can really understand the academic lessons. I think that’s what our program really helps students see—the application of their studies.”

Roxie V. Godfrey, assistant professor in FCSE and one of Boling’s professors, has no doubts about her future success as an educator. 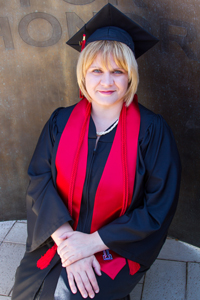 “I had the opportunity of being Ivanka’s student-teaching supervisor and observed her passion for teaching,” Godfrey said. “Her lessons were creative and well-organized, her classroom inviting and her relationship with students approachable. Because of Ivanka’s unique background, she was sensitive to the needs of her students whether they were cultural, physical or emotional. Ivanka’s future students will be lucky to have her as their FCS teacher.”

“As a faculty member, it’s exciting when you have a student who really understands the content of your course and sees all of the possibilities of applying teaching and learning concepts in her own classroom,” Alexander said of Boling. “She’s been a very positive role model for other students in our program.”

Although her studies are finished, Boling will walk in Saturday’s commencement ceremony and be recognized in the program as one of the college’s top students.

Come August, Boling will become an FCS teacher for middle school here in Lubbock. Ultimately, she plans to return to school at some point to obtain a master’s degree.

“Ivanka is a very focused and determined individual who has set high standards for herself,” Allison said. “Her hard work and accomplishments are to be commended. She is a role model for other students and is respected by her professors. I, for one, am extremely happy for her as she heads toward a bright and promising future filled with many exciting opportunities.”