Getting to Know Michael San Francisco

Longtime faculty member speaks about his new role as dean of the Honors College.

Michael San Francisco was appointed dean of the Honors College in December of 2013, and began his new role Jan. 1.

San Francisco joined Texas Tech as an assistant professor in biological sciences in 1990 and was promoted to full professor in 2004. He also is an adjunct/joint professor at the Texas Tech University Health Sciences Center in the Department of Immunology and Molecular Microbiology. He earned his bachelor’s degree in 1977 in India before attending Boston University, earning his master’s in biochemical ecology in 1980 and doctorate in biology-microbiology in 1984. He did post-doctoral research at the University of Maryland in biochemistry and molecular biology (1984-1987) and subsequently at The Ohio State University (1987-1990) in biotechnology.

Why did you want to be dean of the honors college?

At the university I believe that a faculty member’s role should be good and centered. The Honors College provided me the opportunity to take a leadership role in a student-centered environment, where we can engage those students, who are really motivated, who want a challenging environment in their lives. We have a great, dedicated faculty and staff, and I thought we could team up and make something happen for them. I thought the Honors College is the perfect place for them. I had served as associate dean in Honors College in 2008 for a short period, so I had some sense of what goes on in the college.

What are your goals as dean?

I think front and center would be to make the Honors College an integral part of the vasculature of the university, and I use the term vasculature because I think it means I want it to be a part of the sustaining capability of the university, not just a part of it. And so, I think because of the students and the students being so important to our total mission and us being a university, which is all about the students, I think the Honors College is perfect for that role. I think once we make ourselves so integrated into the university culture then we grow outside. We can do both things simultaneously, but that’s my first mission. 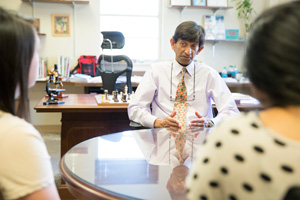 Why have you decided to stay at Tech? What made you stay here?

It’s funny. I almost didn’t apply to Texas Tech. In 1990 I was a post-doctoral fellow at The Ohio State University, had two kids and my wife was a post-doc as well. One day I was looking in a trade journal science magazine for jobs and in the back I saw this thing that says Microbiologist, Texas Tech University, Lubbock, Texas. I looked at my wife Susan and I said, “Where’s Lubbock?” and she goes, “ I don’t know,” and out comes the Rand McNally and we looked at it and I said, “Oh my, should I even apply?” But then we did anyway and I found this community to be fascinatingly friendly. Our kids grew up here, the people are really cool and it’s easy to get in and out of Lubbock. People complain but you can fly right now from Dallas to Houston and then Denver so it’s really not that bad.

Where are you from originally?

I was born in Ceylon, Sri Lanka, a little island. My mother is from there. My father is from Goa in India, an old Portuguese colony. Hence our name, San Francisco, is Portuguese. We lived in Ceylon for six years then I moved to India in 1962 and then went to school over there. Got my bachelor’s degree in agriculture and then in 1977 when I finished I had the opportunity to apply for graduate school and jobs in India, so I did both.

My favorite Red Raider, Texas Tech tradition, my goodness, that’s a tough question. I do support the smaller sports. So I support tennis and soccer, and I figure they wouldn’t miss me at a football game. If I don’t show up to a tennis match the coach will notice. So, to me that’s great. I love that environment. I love that. Oh my goodness, tradition, you know the Carol of Lights is something that comes to mind.

Getting to Know Robert V. Duncan