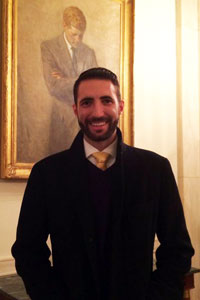 For Brian Anderson, a career in the nation’s capital began with a congressional internship.

Anderson, a Texas Tech University alumnus, started his career with a congressional internship shortly after graduation. Four years later he still lives in DC where he is currently working as a data analyst at the International Monetary Fund (IMF).

Anderson said his education at Texas Tech gave him the confidence to work hard and dedicate himself, which boosted his “staying power” while working in the nation’s capital.

“Once you come to D.C. you realize everyone here has a great degree, from a top school, with a stellar grade point average, speaks another language and has studied abroad,” he said. “Being a congressional intern helps you standout just a little bit more in a city of high-achievers. I had to work very hard and the temptation to give up and go home crossed my mind more than once.”

During Anderson’s internship, many things were going on in Washington, including a presidential and congressional election.

“As an intern in a Democratic-Latino office I had the privilege of attending the Congressional Hispanic Caucus where President Obama was the keynote speaker,” he said. “I got to shake the President’s hand. That was a very memorable experience and I was a little starstruck.”

However, not all his time as an intern was so rosy. That year the Democratic Party lost their majority in the House of Representatives to the Republican Party. Anderson was an intern for Congressman Charlie Gonzalez , a democrat from San Antonio. After the election, over 2,000 democrat staffers lost their jobs and there was a hiring freeze and budget cuts across the entire federal government. The city came to a screeching halt. Finding a full-time job was near impossible. But Anderson was persistent and continued living in the city – sleeping on hardwood floors, blowup mattresses, and couches. 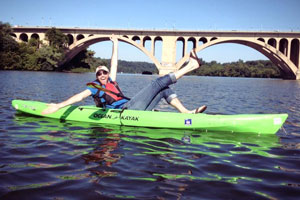 Just over a year after arriving in DC, Anderson’s persistence paid off when he accepted an offer to work at the IMF.  As a data analyst, his job there is to review national economic data for member-countries so that IMF economists can use this data to conduct global economic surveillance and provide customized and independent policy advice to national governments.

According to the IMF’s official website, the institution is a sister organization to the United Nations and the World Bank, all three of which were founded in 1944 in response to the Great Depression and World War II. Today the IMF has 188 member countries and manages a fund of more than $750 billion. Its mandate is to promote international monetary cooperation and exchange rate stability, offer economic policy advice and technical assistance to national governments, and to provide loans to member countries in financial crises or to assist with poverty reduction.

“The IMF is essential,” he said. “Without it, who knows what would have happened in the wake of the global financial crisis.”

Today, Anderson is taking on more responsibilities in his job with external sector statistics, including international reserves data and balance of payments statistics, which record the debits and credits of an economy. Last year he had the opportunity to travel to the island nation of Tuvalu, a Polynesian country in the South Pacific Ocean. While there he went through more than 3,000 expenditure accounts in the federal government’s budget and categorized them into international standards. This improved the government’s ability to analyze their budget, freed up their time to work on other things and made their budgetary data comparable with other countries.

Anderson recently returned to Lubbock to talk to students not only about life in Washington but also about finding your passion and working hard to achieve your goals.

“Dream those big dreams and go after them,” Anderson said. “Be smart about it though. Be strategic. And know that you are great.”

Getting to Know
Brian Anderson

What is your favorite spot on Texas Tech campus?

Everywhere on a bike.

I love how much I learned; from architecture to business and economics to international studies. I had an amazing education and that makes me proud to be a Red Raider.

Love yourself. Practice loving who you are and inoculate yourself from needing approval from others. Feedback is a good tool but it’s not good to be dependent on it. Part of becoming an adult is learning to strive to be your best self without needing a reward or letter grade. Only then can you rid yourself of the anxiety of the then and there and succeed in the here and now. Keep your head down and work ethic up. You will be proud of your abilities–and wonder why you ever doubted yourself.