Chancellor Kent Hance announced today the recruitment of two top scholars, Jacob Hinojos and Hance Clark, to Texas Tech University. Both students received perfect scores on their college admissions exams and will be attending the university in the fall of 2014.

The two students are part of Chancellor Hance’s Top Scholars program and were recognized at the Board of Regents meeting in a packed room full of family, friends and university leaders. 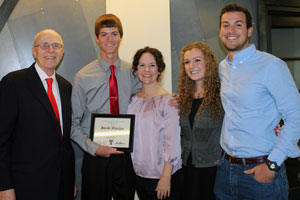 “This is the first time since becoming chancellor in 2006 that Texas Tech will enroll not one, but two students who received perfect scores on their SAT or ACT,” Chancellor Hance said. “Improving the academic quality of our students has been a top priority of mine, and part of that is recruiting the best and brightest students.”

According to data from The College Board, only one in every 5,000 students who take the SAT receive a perfect score.

Prior to Hinojos and Clark, only six students in the university’s history have received a 1600 on their SAT or ACT and enrolled at Texas Tech. This year alone, Chancellor Hance has reached out to seven students through the Top Scholars program who have received perfect scores on their college admissions exams and applied to Texas Tech.

“It has been more than 10 years since a student with a perfect score on the SAT or ACT has enrolled and graduated from Texas Tech,” Chancellor Hance said. “Texas Tech has made great strides in becoming one of the best universities in the country, and this achievement proves that. We are proud to have these two students as part of the Red Raider family.”

“I was actually in school when my mom received a call from Chancellor Hance. She texted me and told me he wanted to speak with me,” Hinojos said. “I’ve never heard of chancellors calling students before so once I realized who it was, I knew it was definitely pretty special and unique. Even though I have brothers at Texas Tech, it wasn’t until meeting with the chancellor and getting a personal tour that I knew I wanted to be a Red Raider.”

Clark, of Farmington, New Mexico, received a perfect score of 36 on his ACT. He has a 4.0 GPA and will graduate in the top 2 percent from the Class of 2014 at Farmington High School. Clark plans to study mechanical engineering at Texas Tech and has also been accepted to the Honors College.

“Early in my senior year, I visited Texas Tech and discovered that I enjoyed the atmosphere and the friendly population of the school,” Clark said. “It was quickly apparent that Texas Tech was a good match for me.  I am looking forward to the beginning of my college career as a Red Raider, and I will strive to represent Texas Tech well.”

Established by Chancellor Hance in the fall of 2007 to advance recruitment efforts and the overall academic quality of students, the Top Scholars program at Texas Tech is a strategic recruitment initiative that actively recruits students who have been admitted to the university with a score above 1500 on their SAT or 34 on their ACT. Chancellor Hance personally recruits these top scholars by making personal phone calls, paying for their travel to Lubbock and organizing first-class tours of campus.

In addition to covering travel costs, Chancellor Hance meets with these top students during their time on campus and helps facilitate tours that highlight Texas Tech’s excellent academic programs and student life. The Top Scholars program is funded by private donations Chancellor Hance raises through the Chancellor’s Council.

About the Texas Tech University System
The Texas Tech University System is one of the top public university systems in the state of Texas, consisting of four component institutions and operating at 12 academic sites and centers.  Headquartered in Lubbock, Texas, the TTU System has an annual operating budget of $1.7 billion and approximately 17,000 employees focused on advancing higher education, health care, research and outreach.

In 2013, the TTU System’s endowment passed $1 billion, total research expenditures were approximately $200 million and total enrollment exceeded 44,000 students. Whether it’s contributing billions of dollars annually in economic impact or being the only system in Texas to house an academic institution, law school, and medical school at the same location, the TTU System continues to prove that anything is possible.