(VIDEO) View the special order as it was carried live on the House of Representative’s website and CSPAN. 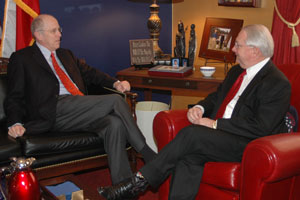 On Wednesday, April 9, Congressman Randy Neugebauer hosted a special order on the House floor to honor retiring Texas Tech Chancellor and former Member of Congress Kent Hance.  Neugebauer was joined by other Members of Congress to pay tribute to Hance’s achievements.

During the special order, Neugebauer read letters praising Hance's achievements from officials, including Governor Rick Perry, Senator Ted Cruz, and former President George W. Bush. He also read notes from Hance's current and former students who praised him as a teacher and mentor.

Hance has served as chancellor since 2006, during which time he grew Texas Tech’s endowment by more than 80 percent.  He achieved an ambitious goal of raising more than $1 billion for the university, and helped the TTU endowment surpass $1 billion for the first time in university history. Hance also played a prominent role in the expansion of the Texas Tech University System, incorporating Angelo State University in 2007 and creating the Texas Tech University Health Sciences Center at El Paso in 2013.

Chancellor Hance had a long career as a public servant, which included serving three terms in Congress representing Texas’ 19th Congressional District.  Hance authored and won passage of President Reagan’s tax bill in 1981, which provided the largest tax cut in the nation’s history. During his tenure, Hance served on the Ways and Means Committee, the Agriculture Committee, and the Science and Technology Committee.

Headquartered in Lubbock, Texas, the Texas Tech University System is a $2 billion enterprise focused on advancing higher education, health care, research and outreach with approximately 20,000 employees, more than 54,000 students, over 340,000 alumni and an endowment over $1.2 billion.

In its short history, the Texas Tech University System has grown tremendously and is nationally acclaimed, operating on 17 campuses statewide and internationally. Under the dynamic leadership of Chancellor Dr. Tedd L. Mitchell, the Texas Tech University System has set forth a bold vision of excellence, collaboration and innovation and continues to prove that from here, it’s possible.