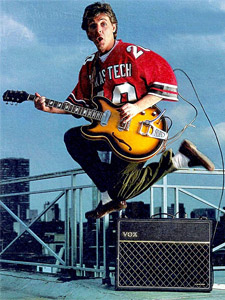 Legendary musician and former Beatle Sir Paul McCartney will open the U.S. leg of his “Out There” tour at Texas Tech University’s United Spirit Arena.

“The importance of music culturally is just such significant dynamic in American history and throughout the world,” Nellis said. “Paul McCartney is quoted as saying the Beatles’ first 40 hits were strongly influenced by Buddy Holly and his music. So it’s appropriate here, in this building that honors one of Rock n Roll’s great pioneers and Lubbock’s son, that we announce that Paul McCartney will play at the United Spirit Arena on June 14.”

According to Robertson, McCartney and his team wanted to come to the hometown of Buddy Holly during his “Out There” tour.

“I find it incredulous that I am fortunate enough to be mayor of this great city at a truly historic time when we have somebody of Paul McCartney’s stature reach out to Lubbock; reach out to Texas Tech University and ask to come to Lubbock,” Robertson said. “We have a history in Lubbock of producing world-class musicians and it didn’t stop in 1936 when Buddy was born.”

McCartney’s first-ever appearance in the hometown of his beloved Buddy Holly will take place Saturday, June 14. According to a news release from concert promoters, tickets will be sold at four different prices: $250, $165, $89.50 and $59.50. Tickets go on sale Friday, April 25 at 10 a.m.

The Out There tour, as always, features music from the most beloved catalog in popular music, as Paul performs songs spanning his entire career–as a solo artist, member of Wings and of course as a Beatle. The set list will also include material from Paul’s most recent studio album “NEW,” a global hit upon its release last year.