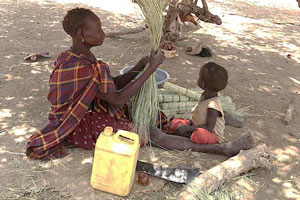 When a Texas Tech University faculty member presented a challenge to a group of students, they took it upon themselves to find a solution.

A team of Texas Tech students calling themselves Dryland Agroecology, decided they had the resources and knowledge to alleviate those problems.

Daniel Cunningham, a graduate student in plant and soil sciences from Richardson, said when the Turkana people reached out to a Mary Murimi, professor in the Department of Nutrition, Hospitality and Retailing, asking to learn how to grow food, students were excited at the opportunity to help.

“The research ties in well with many of the projects we already have going on in the Lubbock area,” Cunningham said. “Members of our team are working hard to find the best agriculture practices to produce food in arid and semiarid areas, especially in the face of our recent extreme drought in Texas, so it was the perfect fit.”

Combined, the four faced the challenge head on. 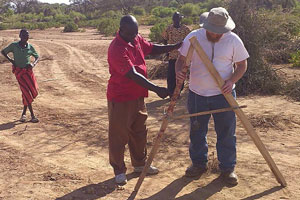 The team visited Turkana in January and met with the community to assess the area and their needs.

The research project continued to progress when the team visited Turkana in January and met with the community to assess the area and their needs.

The team agreed education was paramount when implementing a healthier way of living in Turkana.

“As we teach these skills and implement water harvesting earthworks, integrated cropping systems, rainwater collection cisterns for drinking water, along with the best food preparation and preservation methods, the population can teach each other and add upon the design with real world experience,” Cunningham said.

Ultimately the goal is to improve food resources in the area and give the local population the resources to grow their own food.

The team submitted their proposal to Ag Prize’s 2014 Agricultural Innovation Prize and was selected as one of the top 30 teams in the country. Now, they have moved to the national level and will be competing April 25 -26 in Madison, Wis.

Competing for the Prize

According to Ag Prize, the 2014 Agricultural Innovation Prize: Powered by 40 Chances is a student competition for undergraduate and graduate students in all academic disciplines. The competition is in collaboration with the Howard G. Buffett Foundation, University of Wisconsin-Madison,United States Department of Agriculture and White House Office of Science and Technology Policy. 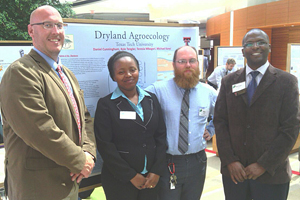 The students presenting their research at the Wisconsin Institute of Discover.

The competition is inspired by Buffett and his son’s book, “40 Chances: Finding Hope in a Hungry World.” According to Ag Prize, the goal of the competition is to educate, support and celebrate the next generation of agricultural innovators.

Competing students have a chance to win $100,000. The top five finalists also will receive $25,000, and the team with the most Facebook votes will win a $15,000 audience choice prize. This is the largest student-focused competition on agriculture in the world.

By February 28, Ag Prize received more than 250 applications from universities across the country. After online judging occurred in March, Texas Tech’s Dryland Agroecology team was selected as a top 30 team to travel to Madison, Wis., for final rounds of judging.

The final round is at the Wisconsin Institute of Discover located on University of Wisconsin-Madison’s campus. Judges will evaluate the teams who are presenting a poster, written plan and oral presentation on their improvements to agriculture and food systems.

For more information on the team’s concept, visit http://www.agprize.com/information-for-students/vote-for-your-favorite-entry/.