The 35-year-old, 14-foot snake was a popular biology specimen to thousands of school-aged children. 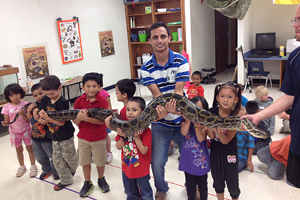 Elvis, during one of his many visits to local and area elementary schools.

Officials in the Department of Biological Sciences reported Wednesday (April 16) that Elvis, a 14-plus-foot Burmese python used for educational purposes, passed away on the sixth floor of the Biology Building after a short illness. He was 35.

“He’s seen everything from kindergarten kids on up,” said Lou Densmore, chairman of the department. “He’s seen at least two or three generations of kids at LISD and Frenship schools. It’s really difficult for us – a bit like we’re losing a friend.”

The python came to Texas Tech 25 years ago, Densmore said, after he was confiscated by U.S. Fish and Wildlife because his owners didn’t have the proper paperwork to keep the animal. Originally 11 feet, 6 inches long, the herpetologist estimated he was probably 10 years old at the time. 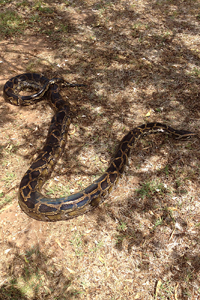 Elvis slithering around behind the Biology Building.

The Burmese python (Python bivittatus) is one of the five largest snakes in the world and native to a large variation of tropic and subtropic areas of Southern and Southeast Asia. Often, they live near water and are sometimes semi-aquatic, but also live in trees. Wild individuals average 12 ft long, but may reach up to 19 ft. They can live up to 50 years in captivity.

About three months ago, Densmore said Elvis stopped eating after having problems with his mouth. Though many pythons don’t eat in the winter months, his refusal to eat was not related to this. Animal Care Services (ACS) staff, Densmore and his students thought they had nursed the snake back to health, but he still refused to eat and began losing weight. Following discussions with ACS and biology department personnel, university veterinarians Drs. Tiffanie Brooks and Paul Stonum planned to euthanize the animal this week.

Densmore said the snake died right before veterinarians were set to begin the procedure.

Densmore said that Stonum will perform a necropsy on Elvis to determine the cause of death. Natural Sciences Research Lab staff from The Museum at Texas Tech will help skeletonize the snake, so that Elvis’ skeleton can be seen by current Texas Tech biology students as well as any interested future Red Raiders visiting the campus.

“Elvis was an ambassador for Texas Tech and especially for biology,” Densmore said.