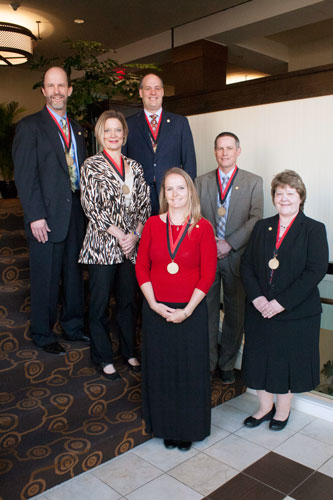 The Distinguished Engineer Award was established during the 1966-67 academic year to recognize the most outstanding alumni of the college. Since that time, 219 former students have received this honor.

“Every year the college selects outstanding engineering practitioners, educators, and leaders to receive the Distinguished Engineer Award. These men and women are among the best in their respective fields,” said Al Sacco Jr., dean of the Whitacre College of Engineering. “It is a distinct pleasure to be able to recognize these outstanding members of our community of scholars. I am always in awe at the level of excellence that our faculty and staff produce in the Whitacre College of Engineering. This year’s inductees are some of the best we have ever honored.”

Baker graduated in 1965 with a Bachelor of Science in chemical engineering. He was the first recipient of a Master of Engineering degree from Texas Tech in 1970. After earning his degree in chemical engineering, Baker spent the next 28 years working for Celanese, the U.S. E.P.A., and two energy consultancies, becoming an acknowledged expert in accident investigations, property damage assessments, business interruption claims and other incident related matters for the downstream petroleum, natural gas and petrochemical industries. In February 1993, Baker, along with his business partner John O’Brien, founded Baker & O’Brien, Inc., building it into a highly respected international energy consultancy. Baker & O’Brien, Inc. currently has offices in Dallas, Houston and London, with clients around the globe. Over the last 30 years, Baker provided damage assessment and business interruption evaluations for almost every major petroleum and petrochemical accident in North America.

Flansburg graduated in 1978 with a Bachelor of Science in mechanical engineering. After graduation, she joined Texas Instruments in Sherman, performing design engineering tasks to support the manufacture of ground support radar systems and laser guided missiles. After completing her master’s degree, Flansburg then worked for LTV Aerospace in Grand Prairie as the structural analysis lead for the design development of a major portion of the B-2 bomber. Flansburg joined Lockheed Martin Aeronautics in 1991. From 1991-1999, she was the F-22 Forward Fuselage Stress Technical Lead. She currently is a Lockheed Martin Fellow at Lockheed Martin Aeronautics in Marietta, Ga., where she has responsibility as the technical coordinator for the Lockheed Martin Analysis Process manuals. She also is responsible for the development of the Structural Analysis technical training curriculum and course materials.

Grasz graduated in 1985 with a Bachelor of Science in electrical engineering. After graduation, Grasz established a reputation as a strategic leader with demonstrated success in diverse industries, including medical device, defense research and semiconductor capital equipment. Grasz co-founded Asante Africa Foundation in 2006 with two African women she met while in Tanzania and Kenya on travel. In 2010, she left the corporate world to manage the organization full time. Her strong leadership and business skills are the foundation of her transition to non-profit work: gather a group of talented individuals, give them a vision and mission to rally around, and then the impossible is achievable. As CEO of Asante Africa Foundation, she has transformed a three-country organization since its inception of one student in one community to one that currently impacts over 36,000 students and 39 communities in two countries and is poised for greater growth.

Gritzo graduated with Bachelor of Science, Master of Science, and Doctor of Philosophy degrees in mechanical engineering in 1988, 1990 and 1992, respectively. After completing his Ph.D. in 1992, Gritzo spent 13 years of his career at Sandia National Laboratories in Albuquerque, where he rose from technical staff member to manager. He oversaw a department of researchers, engineers and technologists who provided computational and experimental research, development and application solutions in fire science and technology for the Department of Energy and a number of other federal agencies. In 2006, Gritzo relocated to Massachusetts to join FM Global, one of the world’s largest commercial property insurers. He currently is vice president and manager of research for FM Global, overseeing a division of scientists, engineers, and technicians who assess property risk and identify solutions to prevent loss at commercial and industrial facilities for clients including one-third of the Fortune 1000.

Harkins graduated in 1992 with a Bachelor of Science in Biochemistry, and Master of Science and Doctor of Philosophy degrees in civil engineering in 1995 and 1998, respectively. After graduation, Harkins took a position as an engineer with the State of Texas in Austin. During her tenure working for the state, Harkins became a designated expert in water and wastewater utility service and served as the state’s expert on numerous occasions. In late 2002, she went to work in the private sector for Dr. William H. Espey Jr. for Espey Consultants. In 2006, she opened her own civil and environmental engineering company, Harkins Engineering, Inc. Harkins currently provides professional civil and environmental engineering services for King Ranch, Inc. and provides municipal engineering services for several municipalities. Now considered an expert in water quality and water quality restoration, she has successfully developed restoration plans for a wide variety of hazardous and non-hazardous contaminants of concern all over Texas.

Smith graduated in 1989 with a Bachelor of Science in mechanical engineering. Smith began his career with the Central and South West Corporation (CSW) in 1989 as an engineer, eventually working at several facilities in Texas and central Florida. CSW merged with American Electric Power (AEP) in 2000. He then became director of gas turbine and joint venture – generation. From 2000 to 2004, he was executive director of IPP and wind, and had responsibility for 12 independent power projects. Moving to AEP Transmission in 2008, he worked as managing director of transmission, and then vice president of transmission engineering and project services. Smith is currently president and chief operating officer for AEP Texas. He oversees distribution operations serving more than 1 million AEP customers in South, Central and North Texas as well as the operating unit’s safety, customer services, marketing, communications, community affairs, governmental affairs, and regulatory functions.

Whetzel graduated in 1993 with a Bachelor of Science in electrical engineering technology. He worked for 22 years at Texas Instruments’ Lubbock wafer fab, holding engineering and management positions in process engineering, equipment engineering, and manufacturing. In 1998, TI made a decision to close the Lubbock facility. He and a small group of other TI employees made the decision to leave TI, remain in Lubbock, keep the fab operational, and convert it to an analog/mixed-signal foundry, which became X-FAB Texas, Inc. Whetzel is now the president and CEO of X-FAB Texas, and has been a managing director of the company since its inception. X-FAB Texas employs approximately 400 people. More than 40 of the approximately 60 engineers at X-FAB Texas are graduates of Texas Tech.