The Vietnam Center and Archive hosts author and filmmaker in 2014 guest lecture series. 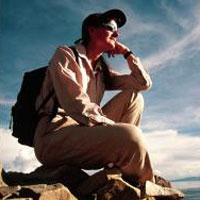 WHAT:           The Vietnam Center and Archive Guest Lecture Series with Karin Muller

Her first expedition took her to the Ho Chi Minh Trail in Vietnam, which enabled her to produce a PBS television special, “Hitchhiking Vietnam,” and a companion book by Globe Pequot Press of the same name.

Her second expedition took her to the Inca Road, a four-thousand mile trek from Quito, Ecuador, to Santiago, Chile, resulting in a television series, “Along the Inca Road,” for National Geographic, as well as a book published by Adventure Press.

Muller hit the road again, this time to Japan, where she lived with a pre-Buddhist mountain ascetic cult, joined a samurai mounted archery team, and completed a 1,300 kilometer pilgrimage around the island of Shikoku. Her experiences during this journey were expressed in “Japanland: A Year in Search of Wa,” as both a documentary series and book.