Texas Tech is one of 10 percent of universities granted the right to shelter a chapter. 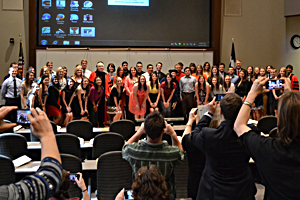 The Texas Tech University chapter of Phi Beta Kappa, the nation’s oldest and most prestigious honor society, elected its new cohort of student honorees who participated in an induction ceremony April 24.

Texas Tech is one of 10 percent of universities granted the right to shelter a chapter of Phi Beta Kappa, and only about eight percent of liberal arts and sciences graduates are selected for a lifetime membership.

“The university is proud to have this prestigious honor society on campus,” said M. Duane Nellis, Texas Tech president. “We are proud of the students inducted and look forward to the great things they will accomplish as alumni of Texas Tech.”

The honor society prides itself on the foundations of personal freedom, scientific inquiry, liberty of conscience and creative endeavor. Its motto, represented by the Green initials is: “Love of learning is the guide of life.” Notable members of the society include: former U.S. Presidents George H.W. Bush, Bill Clinton and Jimmy Carter; seven of the nine current U.S. Supreme Court Justices; actress Glenn Close; and NFL quarterback Peyton Manning.

Students inducted for 2014 are: