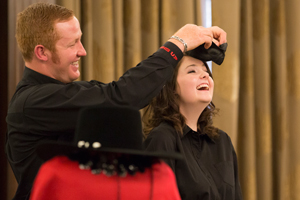 White, a junior from Marble Falls, is majoring in agricultural and applied economics with minors in Arabic and Spanish. Born into a “horse family,” White says she fell in love with horses even before she could walk. In the coming year she will promote spirit and goodwill for Texas Tech at athletic events and other school and civic appearances throughout Texas, while sharing her passion for riding and love for the university.

“The Masked Rider is the single-most recognized representative of Texas Tech,” White said. “Ideally, my Masked Rider legacy will be one of a hard-working horsewoman who was consistently dedicated not only to the position and its duties, but also to Texas Tech University and all that it stands for – honor, integrity, boldness and accomplishment.”

A graduate of Marble Falls High School, White already is a member of the Masked Rider family, as she volunteered on the field safety team two years ago and worked as a Masked Rider assistant during the past year. 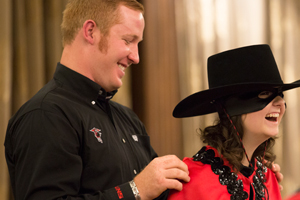 White also is a member of the Texas Tech Equestrian Team, on which she competes in the advanced division against other collegiate equestrians through the Intercollegiate Horse Show Association.

At age 8, White began competing and has since competed at all levels, ranging from local 4-H shows to world championship breed shows. She also has competed in horse judging since that age, consistently placing in the top 5 at the APHA World Horse Show Judging Contest.

Her show career was predominantly focused on Western and English competitive show events such as Western Horsemanship, Western Pleasure and English Equitation; White also is well-versed in jumping, Western speed events and reining.

Other titles and accolades she has earned include various places in the State 4-H Horse Show competitions in 2003, 2007 and 2011 as well as a finalist in Stock Horse Trail, Western Horsemanship, Reigning, Western Riding and Showmanship in 2011. She was named Miss Rodeo Duchess and Princess, Burnet County.

In addition to her riding experience, White is no stranger to spirit activities, as she was a cheerleader and class president at Marble Falls High School. She also served as 4-H Burnet County Council president. 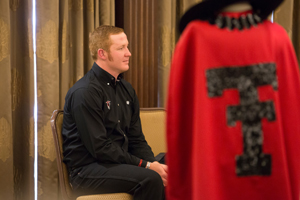 Corey Waggoner logged 255 appearances as the Masked Rider, the most in program history.

After graduation in May 2015, she plans to go to law school and pursue a career in agricultural law.

Corey Waggoner, the 2013-2014 Masked Rider, logged 255 appearances at athletic events, rodeos, parades and other functions, more than any other rider in the history of the program, traveling a record 21,000 miles.

Waggoner said his first run in Jones Stadium will always be a fond memory, but it is only a small part of his many memories of the past year.

“I will never forget the people I worked with in the program who have become like family to me,” he said. “But most importantly I will never forget all of the Red Raider fans, alumni, and community. Every appearance I made it was these people who made my year special.”

Waggoner said driving back to Lubbock from a very memorable run in AT&T Cowboy Stadium in Arlington, was proof that Texas Tech has one of the greatest fan bases.

“All the way back, driving along I-20 and Highway 84, I was constantly passed by enthusiastic Texas Tech fans and alumni waving as they passed by and holding their guns up,” he said. “As the Masked Rider, I strived to leave an impact on everyone I met, but the truth is it was all these people that left an impact on me. I would like to say to all of Texas Tech University, thank you, and it has been an honor to serve as your Masked Rider.”

After he graduates in May, Waggoner will pursue a career in animal nutrition through Cargill and will continue to stay active in the horse industry.