Katharine Hayhoe joins the likes of Beyonce, Pope Francis as one of the world's most influential people. 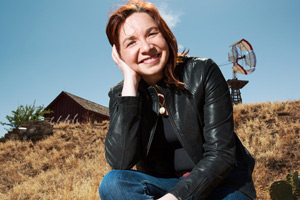 A Texas Tech University climate scientist has been named to the 2014 TIME 100, the annual list of the most influential people in the world.

In the story, guest contributor and Academy Award nominee Don Cheadle wrote of Katharine Hayhoe, a professor and director of the Climate Science Center at Texas Tech University, "There’s something fascinating about a smart person who defies stereotype. That’s what makes my friend Katharine Hayhoe – a Texas Tech climatologist and an evangelical Christian – so interesting."

Cheadle added: "I got to know Katharine as we worked on Showtime’s climate documentary "Years of Living Dangerously." But we are all getting to know and benefit from her work."

The full list and related tributes appear in the May 5 issue of TIME, available on newsstands and tablets on Friday (April 25), and online now at time.com/time100. Hayhoe is listed under the "Pioneers" category.

“I am honored to be included in the TIME 100 list,” Hayhoe said. “Even more so, I am encouraged to see climate change emerging as an urgent concern. With 97 percent of climate scientists agreeing that climate change is happening due to the choices people make every day, I am a spokesperson with one principal goal – to bring public awareness to the simple truth that the scientific debate is over, and now it’s time for all of us to take action. I’m grateful to TIME for bringing further visibility to my work and to everyone who is standing up to climate change around the world.”

“This is a tremendous honor and recognition for Dr. Hayhoe and her diligence in researching this important issue,” said M. Duane Nellis, Texas Tech president. “Her passion and caliber of work provides a snapshot of the high quality of faculty we have at Texas Tech University.”

An Outreach Around the World

Hayhoe is an atmospheric scientist dedicated to discovering and communicating the realities of a changing climate. Her research focuses on assessing the impacts of climate change at the regional-to-local scale and translating this science into input for relevant, informed policy. Hayhoe identifies the changing conditions to which communities, ecosystems and society will have to adapt and quantifies the benefits achieved by reducing carbon emissions from human activities.

Her outreach includes sharing the relevance of climate change with those affected by it here in the United States and around the world. She is particularly concerned with highlighting the plight of the poor and vulnerable who will be disproportionally affected by a changing climate. 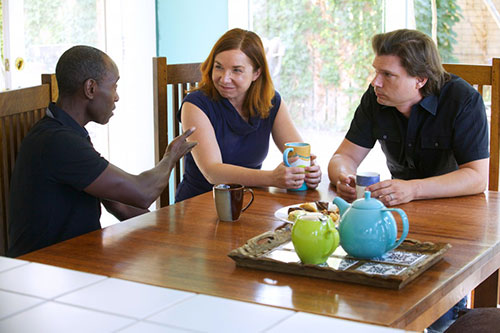 Hayhoe is director of the Climate Science Center at Texas Tech University, part of the Department of Interior’s (DOI) South-Central Climate Science Center, for which she also is a principal investigator. The DOI Climate Science Centers provide natural and cultural resource managers with the tools and information they need to develop and execute management strategies that address the impacts of climate change on a broad range of resources. The centers also provide scientific information, tools and techniques that land, water, wildlife and cultural resource managers can apply to anticipate, monitor, and adapt to climate change impacts.

Hayhoe is also a lead author for the Third National Climate Assessment, which will be released on May 6 and will be available from www.GlobalChange.gov. This assessment is a product of the U.S. Global Change Research Program, a consortium of 13 federal departments and agencies. It is the most comprehensive peer-reviewed analysis of climate change’s impacts in the United States.

She serves on the American Association for the Advancement of Science’s What We Know panel. This initiative communicates the “Three Rs” of climate change: Reality, Risk and Response. She also serves as a scientific advisor to Citizen’s Climate Lobby, the EcoAmerica MomentUS project, the Energy and Enterprise Initiative, the Evangelical Environmental Network, and the International Women’s Earth and Climate Initiative. She is a member of ClimateVoices.org, a network that brings scientists and their fellow citizens together to engage in meaningful, ongoing dialogue about climate change effects on local communities, regions, and the country.

Hayhoe also serves on the American Association for the Advancement of Science’s Dialogue on Science, Ethics, and Religion; the American Geophysical Union’s Hydrology Committee on Uncertainty; the U.S. National Oceanic and Atmospheric Administration’s National Climate Predictions and Projections Team and their Climate.gov advisory team; and has contributed her research to and served as an expert reviewer for the Nobel Peace Prize-winning Intergovernmental Panel on Climate Change.

Together with her husband Andrew Farley, a professor of applied linguistics and best-selling author of “The Naked Gospel,” she wrote “A Climate for Change: Global Warming Facts for Faith-Based Decisions,” a book that untangles the complex science and tackles many long-held misconceptions about global warming.

Her work as a climate change evangelist is featured on the documentary series “Years of Living Dangerously” and “The Secret Life of Scientists and Engineers.” In 2012 she was named one of Christianity Today’s 50 Women to Watch.